Nominations for November’s Darley Sprint Classic 2020 closed on Tuesday with Chris Waller’s defending champion Nature Strip the favourite out of the 69 early entries for the Flemington feature held on November 7. 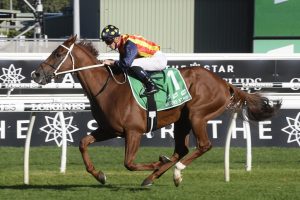 Nature Strip is nominated for a title defense in the 2020 Darley Sprint Classic at Flemington this November. Photo: Steve Hart.

One of the key spring races taking place on the last day of the Melbourne Cup Carnival, this year’s Group 1 $1.5 million Darley Sprint Classic (1200m) – also known as the VRC Sprint Classic – attracted just shy of 70 hopefuls at nomination stage.

Waller has won two of the past five editions with Delectation (2015) and Nature Strip (2019), the latter entered for a shot at becoming the first back-to-back winner since the mighty Black Caviar (2010-11).

Black Caviar’s horseman Peter Moody is back as an official trainer this spring and has thrown in a nomination for WA expat The Velvet King, a four-time placegetter in Group company at home in Perth over the winter.

Also chasing a third VRC Sprint Classic victory this decade is Peter Snowden who won in 2012 with Mental before preparing their eventual dual The Everest hero Redzel for victory in 2017 in partnership with his son Paul.

The Snowdens are dually represented in the early entries by California Zimbol and three-year-old Snitzel colt Wild Ruler.

No three-year-old has won the Darley Classic since Glamour Puss (2005) but there are 15 nominated to try and break the hoodoo in 2020.

Farnan is also confirmed as a runner for the world’s richest turf race, the $15 million The Everest (1200m) at Randwick on October 17, as is fellow three-year-old Darley Classic nominee Rothfire.

Rothfire is at $10 in all-in Darley Sprint Classic odds online at Ladbrokes.com.au trailing only last year’s winner Nature Stripe ($4.20) and another of the confirmed The Everest horses for 2020 – Gytrash ($5.50).

Gordon Richards’ Adelaide galloper Gytrash was brilliant first-up defeating Nature Strip by 1.5 lengths in the Group 3 Concorde Stakes (1000m) at Randwick and the duo will meet again for The Everest and VRC Sprint Classic.

Among the other standout nominations are the 2018 champion Santa Ana Lane who was unplaced as the beaten favourite last year, star of the Apple Isle The Inevitable for Scott Brunton and HQ straight track specialist Zoutori.