The race is on towards the Group 1 Manikato Stakes 2020 at The Valley on October 23 with nominations for the twilight sprint feature closing this week. 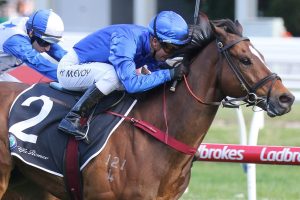 On Tuesday Racing Victoria took the early entries for a host of upcoming Group 1 feature races in Melbourne this spring carnival including those for the Group 1 $1 million Ladbrokes Manikato Stakes (1200m).

The weight-for-age event, won last season by the filly Loving Gaby (2019), attracted 56 nominations including a dozen three-year-olds led by the progressive Anders at $7 to win in pre-field betting.

At the time of the Ladbrokes Manikato Stakes nominations, Not A Single Doubt colt Anders has won his last four starts including back-to-back Rosehill wins this prep by a combined margin of over eight lengths.

After a nearly five length romp home first-up in the Listed The Rosebud, he won the Group 3 San Domenico Stakes (1100m) and will be kept to the sprint races instead of being stretched for the Golden Rose 2020.

The other best fancied of the youngsters looking to go back-to-back for the age group is the fellow Ciaron Maher & David Eustace-trained Away Game at current all-in Manikato Stakes odds of $9 through race sponsor Ladbrokes.com.au.

The Golden Slipper runner-up races first-up this Friday night at Moonee Valley in the Group 1 Moir Stakes (1000m), the results of which are sure to affect the Manikato future markets.

Currently sitting top of the Manikato Stakes odds and also resuming in the Moir Stakes 2020 field is the Godolphin-raced Trekking ($6).

Winner of Adelaide’s Group 1 The Goodwood (1200m) during the autumn, the talented son of Street Cry is well-backed to atone for his last start ninth when midfield during an unsuccessful title defence in Brisbane’s Group 1 Stradbroke Handicap (1400m) from barrier 17 of 18 with 58kg.

The Manikato Stakes first acceptances are open until Tuesday October 6, 2020.