Robert Heathcote’s Group 1 winning Queensland star and confirmed The Everest contender Rothfire will continue towards the world’s richest turf race via the Golden Rose Stakes 2020 this Saturday drawn in gate eight of nine at Rosehill. 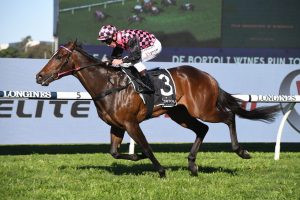 The Everest-bound Rothfire jumps from gate eight of nine in the 2020 Golden Rose Stakes field in Sydney this weekend. Photo: Steve Hart.

The field is now confirmed for the Group 1 $1 million Golden Rose Stakes (1400m) and just nine three-year-olds are set to face off in the set weights classic.

Winner of Eagle Farm’s Group 1 J.J. Atkins (1400m) by a runaway 3.3 lengths as a juvenile in the winter, the youngster resumed at Rosehill on September 12.

He was ultra-impressive blowing his rivals away in the Group 2 Run To The Rose (1200m) with Byrne aboard.

Rothfire is now tipped to complete the Run To The Rose – Golden Rose double for the second year in a row after the success of Godolphin’s champ Bivouac (2019) last Sydney Spring Racing Carnival.

Updated Golden Rose Stakes 2020 betting markets on the final field at Ladbrokes.com.au have Rothfire odds-on at $1.95.

A win will see the three-year-olds’ all-in price firm also for the $15 million The Everest (1200m) on October 17 where he runs for Mieverest.

Just two of his rivals are also under double-figure Golden Rose Stakes odds with the minor placegetters out of the Run To The Rose, stablemates Ole Kirk (2nd) and North Pacific (3rd), considered the dangers.

The Hawkes Racing-trained North Pacific occupies the second line of Golden Rose betting at $5.50 looking to atone for his third in the Run To The Rose when 2.5 lengths beaten.

Prior to that he won Randwick’s Group 3 Up & Coming Stakes (1300m) on a Heavy (10) by over five lengths and so will relish the step-up in distance for the Group 1 on Saturday.

A perennial placegetter, he ran third to King’s Legacy in the Group 1 Champagne Stakes (1600m) during the autumn and has come via the traditional Golden Rose lead-ups this spring.

He resumed when second to runaway winner Anders in the Listed The Rosebud (1100m) run on the wet back in early April, before his Run To The Rose second at 25/1.

Tommy Berry rode Epaulette (2012) to victory in the race for Peter Snowden and chases a second Golden Rose success aboard Ole Kirk eight years on, while North Pacific has dual champ James McDonald in the saddle.

The early Golden Rose Stakes market mover into $10 is the Gerald Ryan & Sterling Alexiou-trained Peltzer in barrier two with Kerrin McEvoy aboard.

The So You Think colt was undefeated as a three-time winner ahead of the spring and is out to bounce back off a second to Anders in the Group 3 San Domenico Stakes and fourth in the Run To The Rose results.

Co-trainer Ryan won the race back in 2017 with Trapeze Artist and looks to have a genuine top three hope this year with Peltzer looking to return to winning form.

McEvoy meanwhile is after his third Golden Rose victory following his previous wins aboard Denman (2009) and more recently The Autumn Sun (2018) for Snowden and Chris Waller respectively.

Peter Snowden has trained a total of three previous Golden Rose winners with the aforementioned Epaulette (2012) and Denman (2009) following on from his first with the gun filly Forensics (2007).

He is after his first in partnership with son Paul this weekend saddling-up the autumn’s Group 1 ATC Sires’ Produce – Champagne Stakes double winner King’s Legacy from the outside alley.

A $15 chance in the markets, the Redoute’s Choice colt could prove the value second-up.

He is two-from-two second-up over his career and will appreciate the 1400m after his dead last when seventh, still only five lengths back, fresh in the Run To The Rose.

The rails-drawn Mamaragan ($13) for John Thompson and the Gai Waterhouse & Adrian Bott-trained Yardstick ($34) complete the line-up.