Inaugural The Golden Eagle winner Kolding from the star Sydney stables of Chris Waller is the early market mover in George Main Stakes 2020 betting at Randwick on Saturday with money coming for him to upset his short-priced stablemate Verry Elleegant. 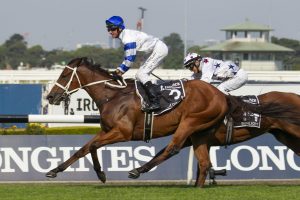 Waller saddles-up four of the seven starters in this year’s Group 1 $500,000 George Main Stakes (1600m) field as he chases his seventh win in nine years.

On the weekend Waller looks well-positioned to secure yet another George Main Stakes victory with his first-up Group 1 Winx Stakes winning mare Verry Elleegant the hot favourite at $2.30 through Ladbrokes.com.au.

In a surprise move by the punters however, Kolding has firmed into $11 to return to form and win for the first time since his $7.5 million The Golden Eagle (1500m) victory at Rosehill last November.

Saluting in the first edition of the lucrative four-year-olds’ feature followed on from Kolding’s Group 1 Epsom Handicap (1600m) success over the Randwick mile when carrying just 50.5kg to victory.

His form over the autumn was more miss than hit however, but the now five-year-old son of Ocean Park looked improved second-up this prep.

After a 13th from out wide (16 of 16) behind Verry Elleegant in the Winx Stakes, Kolding finished just a quarter-length back second behind Dreamforce in the Group 2 Tramway Stakes (1400m).

Presenting fit third-up in the George Main, the galloper is a proven miler who should relish the extra distance and will jump from the outside alley (7) in the small field with Tommy Berry in the saddle.

Godolphin’s reigning George Main Stakes champion Avilius has eased out from $4.60 to $4.80 occupying the second line of betting as he looks to go back-to-back.

Trainer James Cummings however has warned punters not to discount the chances of the now seven-year-old to add a fourth Group 1 success in three seasons to his record.

“He is a wonderful horse but it is unfair that people are starting to talk about him in the past tense,” Cummings told The Sydney Morning Herald.

“The way he is going he is making me think we haven’t seen the best of him yet.

“I can’t remember having a horse like him that just keeps coming up. It shows what a great horse he is.”

Avilius is second-up in the George Main following a close fourth in the Group 2 Chelmsford Stakes (1600m) at the same track and distance a fortnight ago, a run Cummings described as a “big effort”.

“It was a big effort in the Chelmsford Stakes, he was the only horse to make that much ground,” he said.

“It wasn’t a surprise to us because of what he had been doing at home.

“He is a master of weight-for-age and he beat two of his main rivals on Saturday in this race last year.

“It is a quality field, so he is going to have to be at his best to win.”

Dual Tramway Stakes winner Dreamforce for John Thompson is the other best fancied, the rails-drawn veteran paying $5.50 to continue his gun form.

The other two Waller runners are then Winx Stakes runner-up Star Of The Seas ($8) looking to finally go one better at elite level and the consistent Imaging on the drift out form $7.50 to $9.

ATC Oaks winner Colette is the other big drifter in George Main Stakes betting, the Godolphin-raced mare out from $26 to $34 in a price Cummings believes is about right.

“She is probably not entitled to be against these horses at this point given her lack of experience. I think she will be better in another 12 months,” he said.

“She could run a nice race here and be beaten by the lot of them.”