The flying Kris Lees-trained top weight Mugatoo is nearing odds-on territory in the Newcastle Gold Cup 2020 betting markets for Friday chasing a third win on the trot in the spring feature. 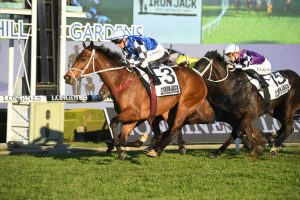 A capacity field of potential Group 1-bound spring stayers face off in this season’s Group 3 $200,000 Newcastle Gold Cup (2300m) including the sole emergency Nothing Too Hard (12) coming in for early withdrawal Sir Charles Road (15).

Heading the field and the latest Newcastle Gold Cup odds at $2.10 through Ladbrokes.com.au is in-form Henrythenavigator six-year-old Mugatoo for local horseman Lees.

He has plenty of experience aboard Mugatoo having ridden the horse to victory in the Listed Canberra Cup (2000m0 back in March, as well as the galloper’s latest victory.

Two back Hugh Bowman rode the stayer to a win in Rosehill’s Listed Winter Challenge (1500m) in late July before McEvoy came aboard for the Group 3 Premier’s Cup (1900m) success at the same track on August 29.

Mugatoo goes up from 57kg to 59kg in the Newcastle Gold Cup weights on Friday, but is being kept at a very conservative price ahead of his first official start at the track.

Despite the size of the field, just two other horses are at single-figures in Newcastle Gold Cup betting this spring including the defending champion Hush Writer ($6).

The Gai Waterhouse & Adrian Bott-trained Rulership gelding saluted in last year’s race carrying 54kg to victory on the back of a lead-up second in the Listed Wyong Gold Cup (2100m).

Subsequent winner of Randwick’s $500,000 St Leger (2600m), Hush Writer was disappointing over the autumn in elite company including walking home some 59 lengths off the winner in the Group 1 Sydney Cup (3200m).

He looked back on track first-up at the start of the month however running a devastatingly close third under a half-length beaten in the Wyong Cup, and comes back from 58.5kg that start to 56kg on Friday for his title defence.

Hush Writer is out to go back-to-back in the Newcastle Gold Cup for the first time since Duo (1965-66) Bet now with Ladbrokes.com.au

The other previous Newcastle Gold Cup winner in the mix is Carzoff (2018) for three-time winning trainer Chris Waller who also took out the race back-to-back with Beyond Thankful (2015) and Sacred Master (2016).

Carzoff is at $16 to win again on non-successive years, the French-bred Zoffany eight-year-old having run second or third four times on the trot recently, including his Grafton Cup third, before finishing eighth in the Premier’s Cup behind Mugatoo last start.

Waller has four starters in the mix chasing his fourth Newcastle Gold Cup title with Carzoff joined in the line-up by stablemates: Norway ($51), Premier’s Cup third placegetter Herengawe ($16) and the other single-figure fancy The Lord Mayor ($8.50).

Drawn in barrier two with Tommy Berry to ride, Rock ‘N’ Pop six-year-old The Lord Mayor finished runner-up in the Grafton Cup before an unplaced start first-up in Brisbane with 60kg.

His latest run was in the Wyong Cup finishing a nostril-flare back for second behind fellow Newcastle Gold Cup hopeful Paths Of Glory who is at $11 to complete the double on Friday.

The Richard & Michael Freedman-trained Paths Of Glory had 54kg at Wyong, while The Lord Mayor carried 55.5kg, the duo meeting equal on 54kg for the rematch at Broadmeadow.

Having just his 14th start in the Group 3, Mastercraftsman six-year-old Paths Of Glory comes in a six-time winner but has work to do from the outside alley.