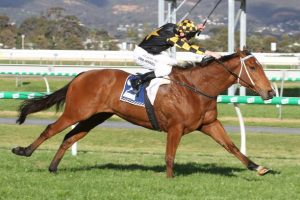 A capacity line-up of 16 starters plus four emergencies has been accepted for this year’s Group 1 $500,000 Neds Sir Rupert Clarke Stakes (1400m) with the favourite drawn a treat in gate five.

This Melbourne Spring Racing Carnival the champion hoop comes aboard Jolly’s flying All Too Hard five-year-old Behemoth who has won three of his past four starts.

After a big autumn – early spring campaign at home in Adelaide, the galloper travelled to Melbourne and dominated the Group 1 Memsie Stakes (1400m) at weight-for-age winning the August 29 feature by 1.5 lengths with William aboard.

He will be tested in Saturday’s handicap at the same track and distance giving the weight away with 60kg, but remains top of the Sir Rupert Clarke Stakes odds at $4.40 through Ladbrokes.com.au.

Success will see him become the first horse to complete the Memsie Stakes – Sir Rupert Clarke double since Regal Roller (2004).

Behemoth is out to do the Memsie Stakes – Sir Rupert Clarke double for the first time since Regal Roller (2004) Bet now with Ladbrokes.com.au

Despite the size of the field there are only four other runners under $10 for the win and the next best in Sir Rupert Clarke betting are a trio of $8.50 second elects including Age Of Chivalry.

Age Of Chivalry comes off a string of frustrating minor placings, the latest seen him finish third to Showmanship in a Moonee Valley Black-Type over 1200m carrying 60kg.

Back to the 1400m at Caulfield and dropping notably in weight to 55.5kg, the galloper looks a standout hope to break a 13-month winning drought and improve on his second in last year’s Sir Rupert Clarke Stakes results.

The autumn’s Blue Diamond winner Tagaloa races second-up as a three-year-old on the weekend having resumed with a close third only a neck off the winner when carrying 59.5kg in the Group 3 H.D.F. McNeil Stakes (1200m).

He has his first look at 1400m taking on the older gallopers in the Sir Rupert on Saturday but the classy Lord Kanaloa colt should be flying with only 54kg.

Banquo is also well-weighted on the minimum, the four-year-old Written Tycoon entire on the quick back-up off his second to Zoutori down the straight at Flemington in last weekend’s Group 2 Bobbie Lewis Quality.

After drawing wide out in gate 18 (into 15 with emergencies out), the Grant & Alana Williams-trained Superstorm is the last of the single-figure chances at $9.50.

Runner-up to his stablemate Regal Power at the track in the $5 million The All-Star Mile (1600m) in mid-March, the now four-year-old son of Sebring is out to improve on his first-up ninth in the Group 3 The Heath over a short 1100m.

Of the double-figure fancies the standouts include the Godolphin-raced Cascadian ($12), Pretty Brazen ($16) coming off a Group 2 victory over Arcadia Queen and last year’s champion Begood Toya Mother ($17) in gate four.