The Group 1 $2 million Caulfield Guineas (1600m) on October 10 is the likely main spring aim for Crosshaven following their big win from out wide in the Listed $140,000 Exford Plate (1400m) at Flemington. 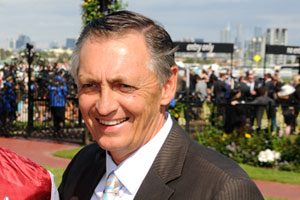 Taking his record up to three wins from four starts with a stylish second-up performance, the Smart Missile gelding showed nice improvement off his sixth a fortnight back in the Group 3 H.D.F. McNeil Stakes (1200m) at Caulfield on August 29 behind Immortal Love.

Ridden to his first Black-Type victory by Daniel Stackhouse, Crosshaven crossed over from his wide gate in the Exford Plate to sit up on the speed travelling second on the outside of front-runner Bartley.

Peter & Paul Snowden’s promising Written Tycoon colt Bartley, backing-up off a 2.3 length 1300m win at Warwick Farm from September 2, led into the turn and gave a kick on the inside down the straight.

Crosshaven kept finding however as the pair went stride-for-stride over the closing stages before the eventual winner moved up, took the lead and drew clear in a terrific performance.

In third rounding out the Exford Plate trifecta in an excellent first-up run was the previously unbeaten Cherry Tortoni.

Patrick Pyane’s boom Night Of Thunder gelding was a two-time winner at the track last season including carrying 61kg to victory over the mile in Black-Type company back in July and, from third last in the run, did his best work late fresh in the Exford.

Crosshaven is likely to run next-up in the Group 3 $250,000 Caulfield Guineas Prelude (1400m) on September 26 before heading into the Group 1 over a mile.

All-in Caulfield Guineas 2020 odds at Ladbrokes.com.au – available in full here – have firmed in from $34 into $17 on Crosshaven, while Exford Plate disappointment Immortal Love has drifted out from $15 to $26.