Official weights for the Group 1 $5.15 million Stella Artois Caulfield Cup (2400m) and Group 1 $8 million Lexus Melbourne Cup (3200m) have been released today with the heaviest weighted of the entries all hailing from the Irish stables of Aidan O’Brien. 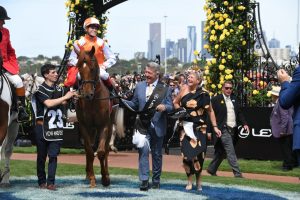 Reigning champion Vow And Declare goes up from 52kg to 57kg in the 2020 Melbourne Cup weights. Photo Credit: Steve Hart.

Last year’s Mackinnon Stakes winning mare for the stable, Magic Wand, is only nominated for the Caulfield Cup this year and has been handicapped on 55kg.

Last year’s Irish Derby winner Sovereign for O’Brien is allocated 57kg for both of the famous Australian Spring Cup races this season.

“Aidan’s O’Brien’s entries are the standouts on performances over the past 18 months and have been handicapped accordingly at the top of the weights for this year’s Stella Artois Caulfield Cup and Lexus Melbourne Cup,” Carpenter said.

“The joint Caulfield Cup topweights Anthony Van Dyck and Japan were both Group 1 winners over 2400m in 2019 and have been placed behind the world’s highest rated horse Ghaiyyath this year.

“Anthony Van Dyck holds the honour of sole topweight in the Melbourne Cup with Japan not nominated.

“The outstanding Magical, who is a six-time Group 1 winner and nominated for the Caulfield Cup only, has 58kg and will need to set a weight carrying record for a mare with Tranquil Star claiming that mark when winning the 1942 Caulfield Cup with 56kg.”

Equal second-heaviest weighted for the ‘race that stops a nation’ with Sovereign are the reigning Melbourne Cup hero Vow And Declare (57kg) for Danny O’Brien and the Godolphin-raced triple Group 1 champ Avilius (57kg) prepared by James Cummings.

Declaration Of War gelding Vow And Declare was a lightweight last Melbourne Spring Racing Carnival when carrying 52.5kg to a second in the Caulfield Cup before having just 52kg on his back saluting in the Melbourne Cup results.

“There is always great interest in what weight is given to the defending Melbourne Cup champion and this year that is Vow And Declare who rises to 57kg having won the race with 52kg last year for Australia with Craig Williams in the saddle for Danny O’Brien,” Carpenter said.

“The 5kg increase for Vow And Declare represents a 1.5kg increase in his weight-for-age benchmark moving to five years of age and a 3.5kg penalty for his 2019 win.

“That’s the same penalty that was afforded to Cross Counter, Prince of Penzance, Green Moon, Dunaden and Americain for their title defences over the past decade.”

Russian Camelot is the highest weighted Northern Hemisphere three-year-old in both the Caulfield and Melbourne Cup weights alongside this year’s Irish Derby champion Santiago (Aidan O’Brien).

“There’s a challenge been set for talented local mare Verry Elleegant also, who has 55kg in both Cups,” Carpenter said.

Pre-field 2020 Melbourne Cup betting markets have Russian Camelot (53.5kg) as the second favourite at $10 behind the Paul Preusker-trained Surprise Baby at $9.

Surprise Baby has 54.5kg in the Melbourne Cup weights and looks very well-weighted having carried only a kilo less to an eye-catching fifth under a length beaten in the event last year.

The latest futures Melbourne Cup betting markets are available here thanks to Ladbrokes.com.au.

2020 Caulfield Cup Weights can be viewed in full here.

2020 Melbourne Cup Weights can be viewed in full here.