It’s game-on for The Everest 2020 with boom South Australian sprinter Gytrash flashing home in near record time to beat the favourite for the $15 million showdown Nature Strip first-up in the Group 3 $160,000 Concorde Stakes (1000m) at Royal Randwick. 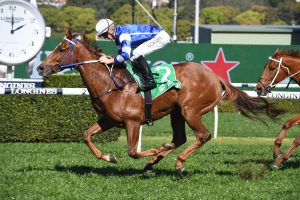 Gytrash has firmed in 2020 The Everest betting after his upset win in the Concorde Stakes first-up. Photo: Steve Hart.

Two of the confirmed horses for the world’s richest turf race back at the track over 1200m on October 17, Gytrash and Nature Strip both resumed in the Concorde Stakes running the quinella in the reverse order predicted by the markets.

Gordon Richards’ Group 1 Lightning Stakes winner Gytrash had travelled a long way to Sydney for his The Everest campaign and couldn’t have been more impressive first-up in the Concorde Stakes.

The event has served as a key lead-up into The Everest having been won by that race’s inaugural and dual champion Redzel (2017, 2018) for the past three years.

Redzel holds the track record of 55.73 seconds and incredibly on a Soft Randwick course this season, Gytrash came oh so close to that time saluting in just 55.81 seconds.

All the money had been on Chris Waller’s multiple Group 1 champion Nature Strip who jumped odds-on in the Concorde out to improve on his fourth to Redzel in the race last year.

The first-up hoodoo continued however for $5.17 million earner who yet again let down the punters fresh.

Having been softened up by the veteran 10-year-old Ball Of Muscle, Nature Strip looked to be over-racing in the early stages pressing forward before sitting second on the outside of the warhorse sprinter in the lead.

Gytrash meanwhile took the sit in third ridden patiently by Jason Collett in the horse’s first start since the close second to Trekking in Adelaide’s Group 1 The Goodwood (1200m) back in mid-May.

Ball Of Muscle led the field into the straight before being tackled by Nature Strip at the 200m.

The odds-on fancy hit the front but was under pressure with the up-in-class Dirty Work running home strongly up the inside and Gytrash flashing home on his outside.

“I thought he was in a bit of trouble turning for home,” Richards said of the eventual winner.

“They kicked away from him but once he knuckled down, he’s a good horse.”

For the second time, Gytrash got the better of the Waller superstar who he also beat home when the duo ran first and fourth respectively at Flemington in the Lightning Stakes over the same distance back in February.

Gytrash ($5) went straight past Nature Strip ($1.45) in the final 50m to win by a dominant one and a half lengths, while Hawkes Racing’s Written Tycoon four-year-old Dirty Work ($10) ran a cracking third.

“It was good,” Richards said.

“he can get balanced up. He’ll learn from that too, his first time around here.”

Richards is now considering keeping Gytrash fresh without another run between now and The Everest having been so impressed with his horse’s performance first-up.

“I don’t know now whether I give him another run or go straight to The Everest,” he said.

“Perhaps go straight to The Everest.

“He was first-up there today…he could do it.”

The bookies agree with Gytrash slashed from $12 into $6.50 in the all-in The Everest odds at Ladbrokes.com.au.

Nature Strip meanwhile was eased out from $3.20 to $4, but remains favourite.

Click here for the full 2020 The Everest betting markets courtesy of Ladbrokes.com.au.