Evergreen nine-year-old Mister Sea Wolf has had his price slashed to win the Group 1 George Main Stakes after leading an all Chris Waller-trained trifecta in Saturday’s 2020 Chelmsford Stakes at Royal Randwick. 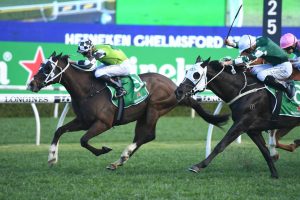 Inaugural winner of the $1 million The Gong last November, Waller’s veteran son of Amadeus Wolf showed he still had a zest for racing returning to the winners’ stall second-up in the Group 2 $250,000 Chelmsford Stakes (1600m).

In a gutsy run from the horse and a good training performance from the master Waller, Mister Sea Wolf improved off a first-up fifth in the Group 2 Missile Stakes (1200m) from August 8 to hold off the late challengers over a mile in the Chelmsford at weight-for-age.

Nash Rawiller gave the $5 favourite a lovely run settled second, right in the slipstream of his front-running stablemate Wu Gok who had a comfortable lead on the field.

Also up on speed was Waller’s dual Melbourne Cup performed Finche settled third, while the Godolphin-raced favourite Avilius was last of all about 16 lengths off the leader at the half-way point.

Racing into the turn Wu Gok really upped the tempo going for home at the 400m, but Mister Sea Wolf was quick to move up and past him with more left in the tank.

The eventual winner broke clear at the 300m, but had to dig deep as his underrated stablemate Yulong Prince ($21) was really charging home late.

On the line just a neck separated the two, with the Chelmsford Stakes trifecta rounded out by Finche ($9), while Avilius had too much to do from right at the back of the field before catching the eye getting up into fourth.

Waller celebrated his sixth Chelmsford Stakes win in nine years and his third in four following the recent victories of the mighty Winx (2017) and Unforgotten (2018).

The celebrations were hampered by the loss of well-regarded Sydney horseman Rick Worthington however who on Saturday lost his long battle with cancer.

“A pretty special race wasn’t it,” an emotional Waller told Sky Thoroughbred Racing after the race.

“To lose a man like Rick is very sad. Too young.

“He’s a tough man and that’s how he’ll be remembered by us.

Winx three years ago was the last to do the Chelmsford Stakes – George Main Stakes double, and the latter run back over the Randwick mile on September 19 offering $500,000 in stakes is the likely next-up target for Mister Sea Wolf.

The price on Mister Sea Wolf meanwhile has firmed in from $17 to $8 with full futures George Main Stakes odds available here.