Five-time winning trainer Chris Waller again dominates nominations for the Chelmsford Stakes 2020 this weekend with a bumper 11 entries for the Royal Randwick feature. 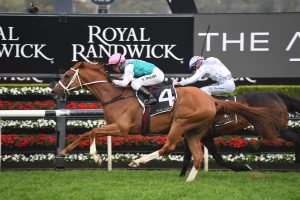 This Sydney Spring Racing Carnival he returns with a powerhouse contingent featuring a host of Caulfield Cup and Melbourne Cup nominated stayers including Finche who ran fifth in the race first-up 12 months ago.

Finche is best known for his fourth in the 2018 Melbourne Cup, the Frankel gelding also running seventh to Vow And Declare last year.

The now seven-year-old, still lightly raced having had just the 15 starts ahead of his return on Saturday, is nominated for a third shot at the ‘race that stops a nation’ with his Cups’ bid beginning in the Chelmsford.

“He has been in work for a long time so he is naturally pretty fit,” Waller told the media this week, also confirming Kathy O’Hara for the ride.

“I think he will run a cheeky race over a mile but he will be harder to beat second up over 2000 metres.”

Other key Chelmsford Stakes nominations from the Waller stable include Group 1 Queen Of The Turf third-placed Danzdanzdance, Golden Eagle winner Kolding and the consistent Yulong Prince.

Godolphin’s James Cummings has two very strong chances in the mix with multiple Group 1 winner Avilius and his ATC Oaks winning stablemate Collette both nominated to get their spring campaigns underway in the event.

Pivotal seven-year-old Avilius races for the first time since his back-to-back Rosehill Group 1 thirds in March when finishing in the money behind Addeybb in the Ranvet Stakes (2000m) and Verry Elleegant in the Tancred (2400m).

He was runner-up to Samadoubt (2019) in last year’s Chelmsford Stakes results before winning the Group 1 George Main Stakes (1600m) at the same track and distance a fortnight later, and is sure to be one of the best in betting for his return this season.

Collette meanwhile is an early favourite in the all-in Caulfield Cup 2020 betting markets, the daughter of Hallowed Crown set to make her four-year-old debut in the Chelmsford having gone out a four-straight winner including her big Group 1 ATC Oaks success on April 11.

“She has come back well,” Cummings told Racenet.

“She has that little bit of speed that you like to see from the now four-year-old that has had the spell under her belt from her Oaks campaign and she will be interesting to see in her now second prep.”

Hawkes Racing’s 2019 ATC Derby winner Angel Of Truth and Tony Pike’s Group 1 winning Kiwi raider The Bostonian looking to improve on a first-up seventh in the Group 1 Winx Stakes are among the other key Chelmsford early entries.

See below for the full Chelmsford Stakes 2020 nominations with all-in betting on the race available here courtesy of Ladbrokes.com.au.