Trainer Matthew Smith said it would be “a dream come true” should his dual Group 1 winner Fierce Impact make it into the Cox Plate 2020 field this spring. 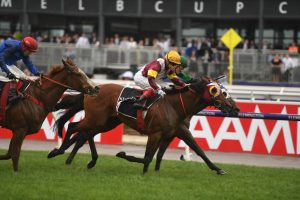 The often underrated seven-year-old resumes racing at Royal Randwick on Saturday lining-up in a stellar edition of the Group 1 $500,000 Winx Stakes (1400m).

A Japanese-bred son of Deep Impact, Fierce Impact has been a revelation for the Warwick Farm-based Smith winning over $2.68 in prize money over 25 starts to date including his opening seven overseas.

The UK import has been racing in Australia since the winter of 2018, when picked up by Smith for around $220,000, and hit the headlines last spring winning back-to-back Group 1 races in Melbourne.

The first was at Caulfield in the Group 1 Toorak Handicap (1600m) at double-figures, the form of which he franked with a narrow Derby Day win at Flemington from out wide in the Group 1 Cantala Stakes (1600m).

Smith knew much earlier than that he was onto a good thing however, and has been singing the horse praises since day one.

“The first day he arrived I thought he was a super horse,” he told Racenet.

“James McDonald trialled him for me early on and said he is a good horse this horse, which I agreed, but then he said ‘nah nah, he feels like a REALLY good horse’.

“From that day onwards, we thought he was better than what we had thought at the time.

“You buy out of those overseas sales and you never know what you are going to get.”

First-up in the autumn Fierce Impact was good again when runner-up to Alabama Express in the Group 1 CF Orr Stakes (1400m), the same distance he resumes over in Sydney on Saturday.

He had three more runs last prep including a third in Randwick’s Group 1 Chipping Norton Stakes (1600m) and an eye-catching fourth only one and a half lengths off the winner Regal Power in the $5 million The All-Star Mile (1600m) at Caulfield.

Smith has brought the entire, last seen running eighth in the Group 1 All Aged Stakes (1400m) at Randwick on April 18, on fitness-wise with two recent Kensington trials ahead of the Winx Stakes.

“He has to be the best horse I’ve ever trained,” Smith said.

“My first Group I winner Hurtle Murtle, I got her really early in my training career and you could argue I might have done a better job with her now then I did then. That’s what I think anyway.

“But this fella is so versatile. He has been beaten in a Group I over 1400m in the CF Orr in February, he has won Group Is over the mile and can race over 2000m.”

A consistent first-up performer (7:1-3-1), Fierce Impact is also well suited to the Soft track conditions and will get the run of the race from barrier four with Jason Collett booked for the ride.

“The main thing is with these older horses, they come back and they want to do it because you never know when they are going to say enough is enough but we are not seeing that.

“We are seeing a horse that is keen to be on the track, his trials have been sharp and he looks great.

“I couldn’t be happier with him to be fair.”

The latest Winx Stakes odds at Ladbrokes.com.au are led by Tony Pike’s first-up specialist The Bostonian ($6) with the Kiwi raider chasing a fourth Group 1 win down under.

Fierce Impact meanwhile looks tremendous value further down the Winx Stakes betting markets at $16, and Smith is hoping for a good first-up showing as he eyes a Group 1 $5 million Cox Plate (2040m) bid at Moonee Valley in October during the galloper’s final spring campaign before retirement.

“You dream about having runners in the Cox Plate like you do a Melbourne Cup. It would be a dream come true,” Smith said.

“I could be wrong but I always thought he would be a better 2000m horse and have always tried to keep him fresh to try and be competitive in these shorter races.

“Whether he is good at 2000m in that company we don’t know because he will have to take another step all together.”

Smith is still plotting the exact campaign he will take into Australasia’s weight-for-age championship but said the final lead-up would likely be the Group 1 $500,000 Turnbull Stakes (2000m) at Flemington on October 3.

Click here for the latest Saturday racing odds on the Winx Stakes 2020 and here for all-in betting on the Cox Plate thanks to Ladbrokes.com.au.