Three fillies are currently installed as the equal favourites in updated Thousand Guineas 2020 betting markets following this week’s nominations for the October 10 feature at Caulfield Racecourse. 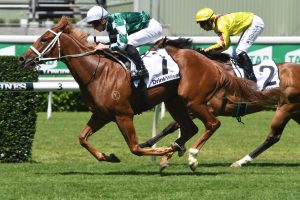 Along with early entries for the Cox Plate and Caulfield Guineas, on Tuesday nominations closed for this spring’s edition of the Group 1 $1 million Schweppes Thousand Guineas (1600m).

Run alongside the $2 million Caulfield Guineas, the event attracted 238 three-year-old fillies, only slightly less than the 264 in the meeting’s marquee race.

Of the 264 Caulfield Guineas 2020 nominations, only three fillies hold a nomination to potentially take on the colts and geldings with Hungry Heart, Instant Celebrity and Personal.

That trio are also the ones at the top of all-in, post-nomination Thousand Guineas odds online at Ladbrokes.com.au with the bookies having a hard time separating the three ahead of the Melbourne Spring Racing Carnival features.

Champion Sydney-based trainer Chris Waller won the Thousand Guineas back in 2014 with Amicus and returns with nine entries this season led by Hungry Heart ($12).

Adelaide’s Phillip Stokes got the Thousand Guineas preparations underway for his undefeated Not A Single Doubt filly Instant Celebrity over the winter.

She made an immediate impact at home winning back-to-back races including the Listed Oaklands Plate (1400m) at Morphettville in impressive fashion on July 18.

The other $12 top fancy, Personal was third behind Tagaloa (1st) and Hanseatic (2nd) in the Group 1 Blue Diamond Stakes (1200m) at Caulfield when under a length beaten in February as a $26 outsider.

Her only run since was a somewhat disappointing 12th in the Golden Slipper, but the bookies are taking no chances on the Tom Dabernig & Ben Hayes-trained daughter of Fastnet Rock returning to Melbourne racing.

The best performed in the world’s richest race for two-year-olds, the $3.5 million Golden Slipper, nominated for the Thousand Guineas 2020 is the runner-up Away Game.

The boom Ciaron Maher & David Eustace-trained daughter of Snitzel heads into the spring boasting a 50% winning strike rate having won four of her eight starts including the Magic Millions 2YO Classic at the Gold Coast in January.

Following her Slipper second to Farnan, Away Game won at Randwick on a Heavy (8) taking out the Group 2 Percy Sykes Stakes (1200m) by 1.5 lengths.

Her last start was a credible fifth against the older mares in the Group 1 Robert Sangster Stakes (1200m) in Adelaide on May 2 and the current Thousand Guineas betting markets have her at $17 for the win.

The well-bred daughter of Exosphere won Rosehill’s Group 3 Magic Night Stakes (1200m) in an upset during mid-March and will be out for atonement when returning having finished 14th in the Golden Slipper last start.