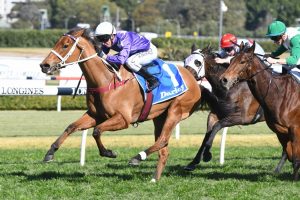 Punters are in for a double-shot of Black-Type racing action at Ipswich this weekend including the fillies and mares facing off in the Listed $125,000 Gai Waterhouse Classic (1350m) that closes the card as Race 9 at 4:44pm (AEST).

There remains a capacity Gai Waterhouse Classic field of 16 female gallopers with the two emergencies – Lunar Light and Sunday Sassy – coming in for early withdrawals Jamaican Rain and Pennino.

Currently paying $3.30 and firming in the Gai Waterhouse Classic odds at Ladbrokes.com.au, Jami Lady returns to Ipswich for the first time since she won at the track at just her second career start in October of 2018.

Progressing nicely since she has stacked up a host of good Black-Type performances in Brisbane and also ran an eye-catching fourth to Invincibella in this January’s $1 million Magic Millions Fillies & Mares (1300m) event.

After a lengthy spell she returned at Eagle Farm on Stradbroke Day and carried 59.5kg to victory over the 1000m on June 6 before another win a month later beating Fiesta in the Listed Bright Shadow Quality (1200m) by 2.3 lengths.

Saturday she is back up in distance and weight, but remains the one to beat with a likely on-speed run from the gate.

Only two other runners are currently under double-figures in Gai Waterhouse Classic betting with Godolphin’s now topweight Multaja ($5.50) carrying 58.5kg from gate four and the Tony Gollan-trained Solar Star ($9.50).

James Cummings saddles-up Medgalia D’Oro four-year-old Multaja who is out to improve on her sixth when three lengths off Jami Lady in the Bright Shadow last start.

She meets her last start conqueror better in the weights on Saturday and gets the chance to finish in the money again here on a softer surface.

Boosting Multaja’s chances are the booking of jockey Michael Cahill who boasts an outstanding record in the event having ridden four of the past seven Gai Waterhouse Classic winners to victory.

Cahill first rode Peron (2013) for John Thompson before his 2015 win aboard the Kelso Wood-trained Real Surreal.

He has also ridden the past two winners with Magic Alibi (2018) and Ready To Prophet (2019), the latter prepared by the race’s namesake Gai Waterhouse.

A specialist at the Ipswich track having won both her previous starts at the course, Solar Star is a recent Eagle Farm winner over 1300m and will appreciate getting back out over further after her second over 1200m last start.

That July 4 run at the Farm saw her carry a hefty 58kg and she will also relish the drop back to just 54kg here with Robbie Fradd coming aboard for the ride.

Jockey Ryan Maloney has been the regular rider of Solar Star this campaign but on Saturday he rides stablemate Twitchy Frank ($11).

Originally prepared by Darren Weir, Choisir mare Twitchy Frank has only been with Gollan since June and had her first start for her new trainer when fourth in Doomben’s Listed Spear Chief Handicap (1350m) on June 27.

Flying hoop Baylee Nothdurft partners Gollan’s widely-drawn Listed Hele Coughlan winner Shalwa ($11) from the outside gate, while the stable’s chances are rounded-out by Amicitia ($15) to be ridden by veteran jockey Jim Byrne.

Byrne is after his third Gai Waterhouse Classic win since 2008 having previously ridden Dorf Command (2009) and Jazz Song (2014) to victory in the winter feature.

The other standout value runner in the mix meanwhile at $12 is the Les Ross-trained River Racer on the quick back-up having run third at the Sunshine Coast in the wet behind Krone in the Listed Glasshouse Handicap (1400m) last weekend.