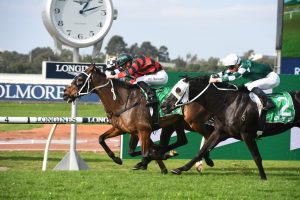 There were 14 early entries taken for this season’s Group 3 $125,000 Premier’s Cup (2200m) including a commanding nine for Waller who is after his first win in the quality handicap event.

Heading the Waller contingent is the in-form Wu Gok chasing a third win on the trot.

The Sebring six-year-old has been flying at home in Sydney this prep winning the Listed Lord Mayors Cup (2000m) first-up on May 30 before his narrow victory back at Rosehill a fortnight later for the Listed Winter Cup (2400m).

Both races were run and won on Heavy tracks.

Wu Gok also holds an entry for the Listed WJ McKell Cup (2000m) in Sydney on Saturday where he would be chasing a hat-trick of winter feature race wins at Rosehill Gardens.

The horse is allocated the 61kg top weight for the 2020 WJ McKell Cup and is also one of nine entries for Waller among the 19 nominations taken for the Sydney showdown.

Eight of the other Waller-trained WJ McKell Cup nominees also feature in the Premier’s Cup nominations with the stable yet to decide in which state their runners will be racing.

Should he head to Queensland, Wu Gok will be returning to Doomben for the first time since winning at the track and distance on a Heavy (8) in April of last year.

The other Waller runners holding dual nominations for the WJ McKell and Premier’s Cup are: Alward, Another Dollar, Black On Gold, Kaonic, Satono Rasen, The Lord Mayor and Winter Cup runner-up Carzoff.

Le Juge meanwhile is the stable’s only Premier’s Cup entry that doesn’t also hold a nomination for the Rosehill race.

Two back the veteran seven-year-old won the Group 3 Chairman’s Handicap (2000m) at Doomben before his last start fourth in the Group 3 Tattersall’s Cup (2400m) at Eagle Farm on June 13.

Waller trained the first four in the Tattersall’s Cup and could be in for a similar whitewash in the Premier’s Cup this weekend.

Outside of the Waller runners the danger looks to be the Michael Costa-trained La Pulga from the Gold Coast.

The progressive Dream Ahead four-year-old won at Doomben over 1600m on May 30 before a close sixth when only 2.4 lengths off the winner Gaulois in the Group 3 Eagle Farm Mile (1600m) as a $31 outsider a fortnight ago.

He has winning form up to the 2200m and so should relish the step-up in distance third-up on the weekend if accepted into the Premier’s Cup field.

Final acceptances for the Premier’s Cup 2020 close on Wednesday morning with markets to open shortly after at Ladbrokes.com.au.