Ballistic Boy finally broke through for a win at Group level on Saturday by taking out the Group 3 Rough Habit Plate (2200m) at Eagle Farm in a dominant staying performance.

The three-year-old by Smart Missile was installed as the easing $2.80 favourite in the markets at Ladbrokes.com.au following an encouraging runner-up performance behind Supergiant in the Group 3 Gunsynd Classic (1800m) a fortnight ago.

Widely regarded as a promising up and coming stayer, Ballistic Boy has struggled at the barriers when racing at Group level, but always looked capable of winning following a pair of dominant wins at Eagle Farm second-up and the Sunshine Coast earlier in his prep. 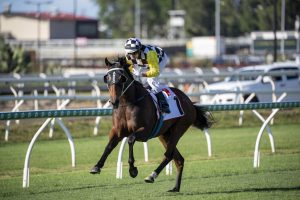 Trainer Chris Anderson, who was also searching for his first win at Group level, knew barrier 12 was a problem on Saturday, but the earlier race pattern of the day seemed to suit his gelding with many winners running on late from out wide.

“Brad Stewart just gave him a peach of a ride didn’t he?” Anderson told Sky Racing.

“It wasn’t an easy watch, I can tell you. I guess the horses have been running so well but we’ve just been missing by very small margins.”

Stewart moved up coming out of the turn before taking up the lead at the 100m mark to kick clear, while Supergiant was on the receiving end this time finishing runner-up.

As for Ballistic Boy’s immediate future, Anderson couldn’t say for sure.

“He’ll probably go to the paddock. I’ll have a chat to Duncan to see what we’ll do, but hopefully we don’t sell him to Hong Kong. I know there’s been a few offers in the past, so hopefully he can stay in Australia and we can have a bit more fun with him.”