Isotope has emerged as the clear favourite in Champagne Classic 2020 betting for this Saturday in Brisbane with the unbeaten filly nearing odds-on territory in the markets on the Group 2 showdown. 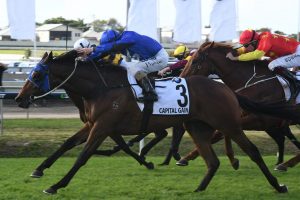 Following three early scratchings from the Champagne Classic field, it is the Tony Gollan-trained daughter of Deep Field Isotope who the punters are rallying behind.

After early battling for top spot in Champagne Classic betting with Rob Heathcote’s four-time winner Rothfire, the filly is now the firming favourite into $2.15 through Ladbrokes.com.au.

Jumping from gate five with apprentice Baylee Nothdurft continuing his association, Isotope chases a third win from as many starts having her first run over 1200m and making her Eagle Farm debut on Saturday.

Her latest victory was over 1000m at the Sunshine Coast on ANZAC Day carrying 56kg, which franked the form of her 10-length win over 1100m at Doomben on debut two weeks earlier.

The Champagne Classic sees her rise in grade, but down to 55kg and with just five other runners in the field she looks a huge hope of continuing the winning streak and saluting for the punters.

Rothfire occupies the second line of Champagne Classic odds easing out to $2.60, the well-drawn Rothesay gelding jumping from barrier 2 with veteran Jim Byrne in the saddle.

After winning his opening four starts, Rothfire was last seen finishing second as the beaten odds-on favourite at the Gold Coast in mid-March.

Freshened-up since his first career loss, he should appreciate returning to Eagle Farm and gets the run of the race from that good barrier.

The only other youngster rated a winning hope by the bookies is the well-credentialed Peter & Paul Snowden-trained Wild Ruler ($6) drawn the outside gate.

Wild Ruler has had just the one run since at Randwick’s Kensington track on May 2 finishing a close second with 59kg on his back, and dropping weight for the weekend on the back of a subsequent trial win in Sydney will get his chance to upset the local runners.

“He ran really well first-up under the big weight – he only got beat because of that weight difference in the last 50m,” co-trainer Peter Snowden told Racenet this week.

“He has come on nicely and has had another good trial since then and he’s good to go.

“It was good to see that form [from last start] franked when [the winner] Macroura came out and won a really hot race at its next start.

“It’s hard for me to get a gauge on the Queensland two-year-olds – they do look impressive watching them but they are different form-lines completely.

“When Wild Ruler won the Nursery he was still really raw and really new and he is still not the finished product, he still gets a bit keen in his races.

“But he is a very talented colt that is for sure and he will just get better with racing.”

Click here for the current Champagne Classic 2020 odds thanks to Ladbrokes.com.au.