The 2020 Champagne Classic field is down to just eight juveniles with Isotope and Rothfire battling for favouritism in the Eagle Farm showdown on Saturday. 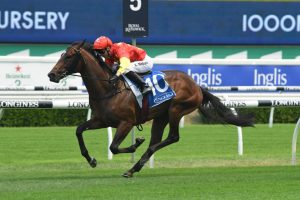 A diminutive field of potential J.J. Atkins two-year-olds face off in this season’s Group 2 $175,000 Champagne Classic (1200m) that runs alongside the Victory Stakes for the Stradbroke hopefuls in Brisbane this weekend.

The early withdrawal of the Chris Waller-trained Overlord (5) from the original final acceptances sees only eight remining chances in the Champagne Classic including Tony Gollan’s narrow $2.50 favourite Isotope.

Coming in one to gate five with in-form apprentice Baylee Nothdurft to ride, the unbeaten daughter of Deep Field chases a hat-trick of wins as she makes both her Eagle Farm and Black-Type debut in the Group 2.

The step-up to 1200m looks a non-issue for the progressive filly who won on debut at Doomben on April 11 by a runaway 10 lengths before a lead-up Sunshine Coast victory over 1000m on ANZAC Day.

Nothdurft was aboard for both wins and gets the chance to enjoy a Group victory on Isotope for the punters this weekend.

The danger occupying the second line of Champagne Classic betting at $2.60 through Ladbrokes.com.au is Rothfire for iconic Brisbane trainer Robert Heathcote.

The Rothesay gelding has won four of his five starts to date including all three at the Eagle Farm track and is out to atone for his sole loss that came on March 14 at the Gold Coast as the beaten odds-on favourite.

That was his first 1200m run but having destroyed his rivals at Doomben by 4.5 lengths over 1100m the start prior, the Champagne Classic distance should not present a worry on the weekend back at this pet track.

The last of the single-figure fancies that could target the Group 1 J.J. Atkins (1400m) back at the track on June 6 is the Peter & Paul Snowden-trained Wild Ruler ($6).

Drawn the outside alley with Ryan Maloney to ride in place of Kerrin McEvoy, the well-bred Snitzel colt won the Inglis Nursery (1000m) on debut last December before racing fresh on May 2 for a second on the Kensington track at Randwick.

He was narrowly defeated carrying 59kg there and has won a subsequent trial ahead of his second-up run in Brisbane on the weekend where, dropping back to 57kg, he looks a genuine hope at a nice price.

Chasing an upset at double-figures are the likes of the Godolphin-raced Beyliks ($10) drawn the rails and the early Champagne Classic market mover The Drinks Cart ($12) for Toby & Trent Edmonds coming off a lead-up win at the Gold Coast.

Click here for the updated Champagne Classic 2020 betting markets at Ladbrokes.com.au on the final acceptors.