Dawn Passage was crowned the winner of Saturday’s Listed 3YO Inglis Guineas after emerging as the new favourite following the scratching of Masked Crusader.

The Gai Waterhouse and Adrian Bott-trained three-year-old was searching for two in a row following a last start win in the Group 3 Hawkesbury Guineas and did not disappoint punters who jumped on board at the $2.00 odds. 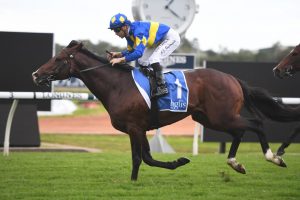 Jockey Adam Hyeronimus put the pressure on from the gates to sit just off the speed behind the leading Bandersnatch. In the small field of five, the inside draw helped the pair establish a spot one off the rail, right before the speedy colt grabbed the lead at the 200m mark to beat home the charging Rocha Clock.

Glen Boss got going on Rocha Clock from a wide position coming into the turn and the impressive filly by Pierro did not disappoint holding on for second.

The other late eye-catcher was Air to Air, who flew home for third at long odds under Jason Collett.

The filly by Smart Missile was a last start winner over the mile at Kembla Grange, but looked severely outclassed stepping up in grade and now looks one to follow.