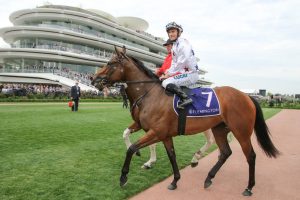 Tony & Calvin McEvoy’s ace Zoustar four-year-old is one of a capacity field of sprinters lining-up in this year’s Group 1 $400,000 Robert Sangster Stakes (1200m) with the top elect drawn barrier 16.

With emergencies out, Sunlight could come into 14 and history shows that plenty of Robert Sangster Stakes winners have jumped from double-digit barriers in recent years including nine from 2007-19.

Sunlight is second-up on the back of her second to Black Caviar Lightning winner Gytrash in the Group 3 RN Irwin Stakes (1100m) on April 18 and will relish the step-up to 1200m fitter for the run.

She currently pays $3 in the Robert Sangster Stakes odds online through Ladbrokes.com.au and is followed in the markets by three other single-figure fancies including Away Game ($4.80).

The obvious danger out to make history with a Robert Sangster Stakes win as a two-year-old, Ciaron Maher & David Eustace’s incredibly tough filly is yet to run a bad race in her seven-start career to date.

The two-year-old daughter of Snitzel was last seen saluting at Randwick on April 11 in the Group 2 Percy Sykes Stakes (1200m) by 1.5 lengths carrying 56kg.

The Magic Millions 2YO Classic winner and Golden Slipper runner-up will be flying on the weekend coming right back to just 47kg in gate four taking on the older sprinters.

“Away Game has travelled down from Sydney in good order,” co-trainer David Eustace told the media this week.

“Hopefully with the drop in weight we think she’ll be highly competitive.

“You wouldn’t be doing it without the weight relief, but she’s obviously also very smart.”

The other best in betting are Godolphin’s Group 1 winning three-year-old filly Lyre ($9.50) who is yet to win this year and the well-credentialed I Am Excited ($9).

An early market mover having opened at $11, the David Pfieffer-trained I Am Excited gets the run of the race from gate five and was last seen carrying 59kg to a brave fifth in the wet in the Group 2 Sapphire Stakes (1200m) from a wide alley (16 of 16).

The Snitzel five-year-old will get a better run from her nice starting position this weekend and is out to secure her second Group 1 win in three starts having scored an upset on March 21 at Rosehill in the Group 1 The Galaxy (1100m).

The best of the longer priced mares in the mix include the James Cummings-trained The Hunter winner Savatiano ($10), Away Game’s ultra-consistent stablemate Bam’s On Fire ($16) coming off a lead-up Group 3 win at Caulfield and last start Bel Esprit Stakes runner-up Humma Humma ($17).