Three-time Group 1 winner Sunlight has suffered an early blow drawing out wide in a capacity Robert Sangster Stakes 2020 field in Adelaide this weekend. 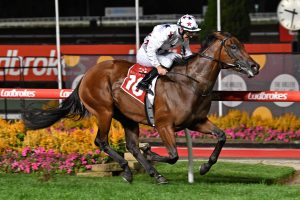 Elite level racing moves to Morphettville on Saturday and this season’s Group 1 Robert Sangster Stakes (1200m) offers a reduced $400,000 in prize money due to the ongoing impact of COVID-19 on Australian racing.

The lesser stakes has not reduced the class of this season’s Robert Sangster Stakes field however with a star-studded line-up of 16 fillies and mares plus two emergencies in the mix.

Pre-post favourite in Robert Sangster Stakes betting at Ladbrokes.com.au, the Tony & Calvin McEvoy-trained Zoustar four-year-old Sunlight has work to do out in barrier 16.

She could come into 14 if the emergencies come out, jockey Barend Vorster again riding the $6.5 million earner after partnering her at the track last start when second to Black Caviar Lightning winner Gytrash on April 18 in the Group 3 RN Irwin Stakes (1100m).

Sunlight presents fitter second-up in the Robert Sangster Stakes and will relish getting up over the 1200m distance that she won all three of her Group 1 titles over in Melbourne as a filly.

“The race looks to be put on for her. She’s just got to be on her game,” co-trainer Tony McEvoy todl the media this week.

“It looks like she has taken the natural improvement that she does from that first to second run.

“She has lightened off a little bit more which she needed to and she has worked really sharply since the race.

Drawn the opposite end of the field in barrier four is the incredible two-year-old, Away Game, continuing her outstanding juvenile season for Ciaron Maher & David Eustace.

The super tough daughter of Snitzel has been up since November winning a host of races including January’s Magic Millions 2YO Classic.

After a Golden Slipper second, she was last seen storming home at Randwick on April 11 to win the Group 2 Percy Sykes Stakes (1200m) on a Heavy (8) track and carries just 47kg this weekend in her toughest test yet.

The Maher & Eustace operation are also represented in the race by the ultra-consistent four-year-old Bam’s On Fire who ran second in three Group races in Melbourne before her last start Caulfield win in the Group 3 Victoria Handicap (1400m).

Along with Away Game, the other youngest Robert Sangster Stakes contender this year is Godolphin-raced three-year-old Lyre.

Anthony Freedman’s Lonhro filly is looking for her first win since taking out the Group 1 Blue Diamond Stakes (1200m) as a two-year-old back in February last year.

It may have been some time since her last victory, but Lyre has been competitive in plenty since including her third in the Slipper of 2019.

This season she has had three runs for three top four efforts, her last start producing a fourth in the Listed Bel Esprit Stakes (1100m) at Caulfield behind William Thomas.

Second in that same race, Humma Humma also heads to Adelaide for Saturday’s Group 1 sprint, the John McArdle-trained Denman mare out in gate 11.

Other standout hopes include recent Group 1 The Galaxy winner I Am Excited (5) and Godolphin’s other representative Savatiano (9) looking to return to winning form.