Quick Thinker has taken out the $1 million Australian Derby (2400m) at Randwick, handing trainers Murray Baker and Andrew Forsman their second win as a partnership in memorable style. 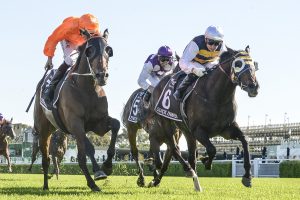 The three-year-old colt by So You Think was backing up on short rest after winning the Group 2 Tulloch Stakes at Rosehill last week.

Barrier 6 proved to be the winning factor for Quick Thinker after jockey Opie Bosson got going on the outside coming into the turn. The pair were tested heavily down the straight with the very brave Zebrowski challenging on the rail, but Quick Thinker held on just long enough to win by a stride in a race for the ages.

“He’s been a pretty laid back customer. I was confident he was the fittest horse in the race and as it was it worked out that way,” Bjorn Baker said after the race.

Quick Thinker was $8.00 to win with Ladbrokes.com.au as he stepped out over the 2000m mark for the first time. The win also marked Baker’s fifth Derby win after first winning the race with Mon Du Jeu back in 2008.

“I know Andrew and Murray haven’t had the best of seasons so they’ve been hankering to do well here, keen to get a lot of new horses in the stable and have a good go for next season,” Baker added.

“I think they’ll be thrilled, they’ll just be disappointed they’re not here.”

Castelvecchio was the favourite on Saturday after winning the Rosehill Guineas a fortnight ago, but the Richard Litt-trained three-year-old struggled on the wet track as he and fellow favourite Shadow Hero were run out of sight.

Zebrowski also gained plenty of respect digging deep for second. Fresh from a win in Inglis Sires’, jockey Hugh Bowman position the Savabeel gelding perfectly coming into the straight and he certainly looks one to stick with going forward.

Queensland’s own Eric The Eel also did enormously well in third backing up from a win over 2200m at Doomben last week.

The final 2020 Australian Derby finishing order can be viewed below.