Wendy Roche’s pizza-eating mare Nettoyer made history on Day 1 of The Championships coming with a swooping late run to score a massive boilover in the 2020 Doncaster Mile results at Royal Randwick. 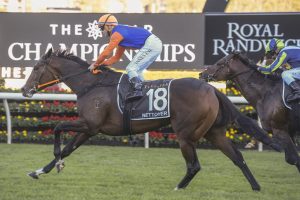 The classy but underrated daughter of Sebring went around at a huge price in the Group 1 $1.5 million The Star Doncaster Mile (1600m) despite boasting an excellent strike rate at the track and distance.

Two back Nettoyer won the Group 3 Aspiration Quality (1600m) carrying 56kg before her last start fourth to the exciting import Addeybb in the Group 1 Ranvet Stakes (2000m) at Rosehill on Slipper day.

The form of that race was franked when the runner-up Verry Elleegant won last weekend’s Group 1 Tancred Stakes (2400m) and Nettoyer added to that in the Doncaster Mile results for 2020.

In a career highlight for young hoop James Innes Jnr, he got the call-up to ride the mare on the 51.5kg lightweight and was overcome with emotion after winning his first Group 1.

“It is very surreal. It still hasn’t sunken in and I don’t think it will for a little while,” he said.

“Wendy (Roche) said to my manager through the week ‘I’ve only declared this horse once before and it was when it won first up with Hugh (Bowman) and the other time was today’.

“Full credit to her (Wendy) and her team, also to my manager, he had to chase pretty hard to get me on.”

“I am flat out getting a ride most days. The fact I can ride light and get an opportunity like this, it is just unbelievable.”

It was also the first elite level success for the entertaining Warwick Farm-based Roche who had been singing her mare praises to anyone who would listen all through the week.

“I’ve told everyone she would win today and she’s won.”

Another mare with a far greater record, 10-time Group 1 winning Kiwi Melody Belle jumped the favourite in the Doncaster despite carrying the equal 57kg top weight.

The favourite was three-wide in the early stages, midfield in a clump of runners fighting for positions as the fast-jumping Quackerjack led the Doncaster field around.

Innes meanwhile allowed Nettoyer to drift back and settle near the tail-end, not joining into the fight until the closing stages.

Around the turn Quackerjack remained just in front followed by the likes of Yulong Prince up along the rails before the backmarkers began their runs.

Melody Belle was trying coming down the outside still three-wide along with the exciting John Sargent-trained Randwick Guineas placed colt Brandenburg.

In a finish few predicted however, all eyes were soon on the flying Nettoyer as she charged down the outside, swooping to the front to clean up her rivals in a brilliant performance.

On the line Nettoyer ($41) had a notable margin to spare over the Chris Waller-trained runner-up Star Of The Seas ($26) who added even more value to the juicy Doncaster Mile quinella.

“She’s going to get pizza tonight that’s for sure!” Roche said of her Doncaster Mile winner.

In third was Brandenburg ($7.50) who finished just ahead of the brave beaten favourite Melody Belle ($5.50).