The Championships 2020 are underway at Royal Randwick with the opening race on Day 1 – the Group 3 $200,000 Kindergarten Stakes (1100m) – taken out in an absolute demolition job by the very promising looking Hawkes Racing-trained colt Doubtland. 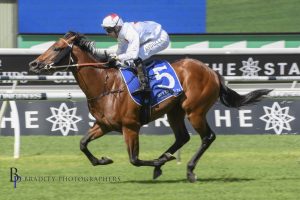 Doubtland could not have been more impressive winning the 2020 Kindergarten Stakes. Photo: Steve Hart.

On debut the young bay won over 1100m at Randwick’s Kensington track on a Soft (7) and he flew through the Heavy (8) in impressive fashion in the Kindergarten Stakes.

Never Never River led the Kindergarten Stakes field around, while Doubtland was settled back in the second half of the runners awaiting his turn.

Once on the straight Avdulla got out wide on the $5.50 pop in betting, pouncing on the outside to take up the lead inside the final furlong and put the race away very quickly by an impressive margin.

“Brenton didn’t panic…when he got out wide he had a lapful of horse and it was all over for mine.

“This was just a lovely, lovey win he’s just going to be a force to be reckoned of as a three-year-old.”

Last year’s winning trainer James Cummings had to settle for a distant second with his Exceed And Excel colt Jerle, while the Kindergarten Stakes trifecta was rounded out by Tony Pike’s Group 2 placed Kiwi visitor Not An Option.

Cummings’ other runner was the well-backed favourite Damaged who dropped right out, while Peter & Paul Snowden’s Blue Diamond graduate Rulership was also disappointing running fourth even though he was blocked for a run on the turn for home.

There was no taking away from the class of Doubtland’s victory however, the two-year-old putting his head out, stretching and really running through the line well.

With the Brisbane Winter Racing Carnival cancelled due to the COVID-19 pandemic, there is no chance of Doubtland racing on this campaign.

Hawkes said that heading to the paddock after the Kindergarten was always the plan with the team focused on getting him right for a huge spring preparation.

“He’s a Group winner now, he’s worth a lot of money and he can go for a break now and come back as a lovely three-year-old,” Hawkes said.

“It’s a spring plan now with this bloke, always sort of has been.

“We’ve spaced his runs, kept him fresh, and as you saw today, he was just explosive.

“Going forward (he’s a horse) we’re going to have a lot of fun with.”