David Harrison’s undefeated colt Gemma’s Son is the red-hot favourite to take his career record up to five from five in Saturday’s Karrakatta Plate 2020 at Ascot Racecourse. 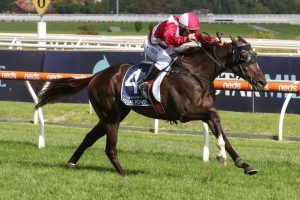 This year the sprint feature is worth the same amount as Sydney’s Group 1 Inglis Sires’ with prizemoney reduced for all The Championship races at Royal Randwick due to the COVID-19 pandemic.

Perth Racing has left the prizemoney for the big one on Saturday at half-a-million and the latest Karrakatta Plate odds at Ladbrokes.com.au have class Snippetson colt Gemma’s Son at $1.65.

The very promising chestnut has won all four of his starts since the start of the year including the Listed $150,000 Perth Stakes (1100m) at the Ascot track by nearly two lengths last time out.

He is already proven at the 1200m distance having taken out WA’s 2YO Magic Millions Classic in February and will take the power of beating from a midfield barrier seven draw this weekend.

Jockey Paul Harvey chases his second win in the Group 2 feature aboard the top elect having previously ridden the Trevor Andrews-trained Lucky Street to victory in 2015.

So confident are the bookies that Gemma’s Son will salute, no other runners are under double-figures for the win.

The next best in Karrakatta Plate betting are the in-form Starfield Impact ($10) with the outside barrier to overcome and the Shane Wolfe-trained fellow filly Watch Me Dance ($10).

Mike Santich’s Demerit filly Starfield Impact is out to beat the boys in the Karrakatta Plate for the third time in five years following on from fellow winning fillies Whispering Brook (2016) and Lucy Mae (2017).

She boasts a 50% winning strike rate over her six-start career with all of her victories coming at the Ascot track.

It is always hard to bet against a filly in form, but the wide alley and step-up in distance are queries for her this weekend.

Watch Me Dance also brings promising form into the Group 2 test on Saturday, the I’m All The Talk filly having placed third to Gemma’s Son in the Magic Millions Classic before a narrow win at Ascot over 1100m on February 22.

She stepped up in grade on March 21 for the Gimcrack Stakes and was far from disgraced when crossing only a half-length back second from the wide barrier (11 of 11).

Drawn better for her rematch with Starfield Impact this weekend, Watch Me Dance definitely looks one for the exotics.

The other most likely to score an upset Karrakatta Plate victory this autumn are considered to be the Simon Miller-trained All American filly American Choice ($11) to be ridden by the ‘Wizard of the West’ William Pike and Patrick Carbery’s mount Dom To Shoot ($13) coming off a non-Black-Type win at the track and distance on March 14.