An outstanding training performance from Gai Waterhouse and Adrian Bott has seen Shout The Bar claim an upset victory in the Group 1 Vinery Stud Stakes (2000m) at Rosehill. 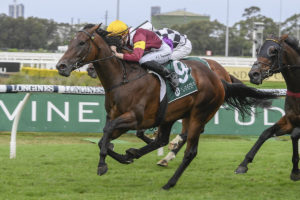 Chris Waller held all the chips with three-year-old filly Funstar backed into $1.60, but the short-priced favourite failed to make up ground from a wide position as the front-running Shout The Bar led form barrier to box.

Jockey Adam Hyeronimus chose to dictate the speed early by shooting straight to the front from the barriers. The 29-year-old had never won a Group 1 before and said afterwards that he never thought he was a chance at winning.

“Not once at any stage did I think she is going to win. She is probably not actually a leader. I probably led by default, the whole race she had her ears pricked just floating along. Through the middle stages I was quite worried that I was going too slow and that is why I picked the tempo up through the half mile,” Hyeronimus told Sky Racing.

“I didn’t want it to turn into a sit and sprint because I know that she is tough and I knew that she would run a strong 2000m, and I said that all along. From her second trial I said to Adrian this is our Oaks horse and she hasn’t let us down yet.”

Shout The Bar was having his fourth run on Saturday but punters failed to find him at the $16.00 odds. The Not A Single Doubt filly had winning form to its name after a pair of Benchmark wins at Beaudesert and Kensington before placing second in the Kembla Grange Classic a fortnight ago.

The victory also marked the third Saturday in a row where the Waterhouse and Bott stable won a Group 1.

“It’s been an amazing progression from her. She has shown us plenty of ability this campaign. Her class shone through over the shorter trips, we thought she was very vulnerable early days but she surprised us over those 1100m races, she was just doing it on sheer class and talent,” Bott said after the race.

Funstar failed to run a place in the end as the rival Probabeel dashed in for second. Nudge was the other eye-catcher enjoying a dream run on the rails to run third for Waller.

Shout The Bar has now firmed into the $4.80 second elect in futures Australian Oaks 2020 betting for the $1 million feature over 2400m at Randwick on April 11.

Verry Elleegant for Waller won the Vinery Stud Stakes – ATC Oaks double last year, and was back dominating the Tancred Stakes results in 2020 by over four lengths.