The Bjorn Baker-trained Positive Peace has claimed his fifth in a row at Rosehill by taking out the Group 2 Emancipation Stakes in impressive fashion. 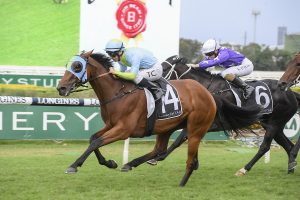 After winning a pair of Benchmark races over the last month on the same track, the four-year-old mare by Stratum stepped up to the 1500m with jockey Tim Clark in the saddle and showed an enormous turn of foot to win by a length over second place-getter Noire.

Positive Peace was installed as a $7.50 pop in the capacity field and got away to a fast start to sit just off the speed behind Amangiri. Clark then took up the lead at the turn and found himself with plenty of daylight in front to race away for the victory.

“Not many can win five in a row anywhere, let alone in Sydney, so she obviously has come back a stronger mare this time in and she is racing through her grades really well,” Clark said after the race.

“That is an important win for her but there is no reason why today is going to be the end of her winning streak either, she’s just going that well, and I’m sure Bjorn will find a suitable race for her to attack again.”

The bookmakers at Ladbrokes.com.au have reacted accordingly to Positive Peace’s impressive winning streak by moving her into $12 for the Group 1 Coolmore Legacy Stakes (1600m) in two weeks time at Randwick, but staple representative Steve Maclean wouldn’t say for sure if she would go again.

“She is nominated for the Coolmore Legacy in two weeks. Who knows, if she continues to thrive Bjorn might go again,” he said.

Noire also saw some love after storming home along the rails for second and is now a $15.00 chance in the futures Coolmore Legacy Stakes 2020 betting markets.

Despite failing to place in the Vinery, Funstar remains the favourite at $5.00 ahead of impressive Kiwi galloper Melody Belle. Probabeel moved into $6.00 after running second in the Vinery while Alizee occupies the next line of betting at $12.00.
All-In Coolmore Legacy odds courtesy of Ladbrokes.com.au can be viewed here.