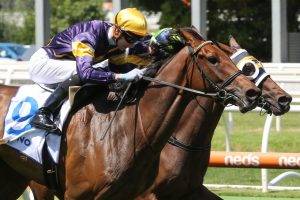 Jockey Jye McNeil gained confidence he might have uncovered a winning ride for the 2020 Caulfield Cup in October after Teofilo four-year-old ran out the mile and half at his first attempt at the trip in the Mornington Cup.

“Obviously that’s the ticket into it now, I’m sure,” McNeil said.

“And with the run at the that trip, it gives me a lot more confidence.

“He really relished the line first time at the trip and I think with maturity and racing, he’s going to develop into a lovely stayer.”

The former English-trained gelding had his fourth run down under for his third victory on the Aussie turf, the Mornington Cup victory giving Aktau a ballot free ride into the Caulfield Cup field.

McNeil settled right back in the field as Hush Writer led them around setting a genuine pace up front in an honesty run Cup.

It was a real staying test as the front runners upped the anti a long way from home, but in the end Aktau ($4.60) was too strong as the solidly run race brought in the backmarkers.

McNeil found himself in a bit of traffic running out of options when a number of horses went to his outside, but the hoop was patient waiting to get the gap he needed.

Shook up towards the 600m, once in the clear Aktau proved the superior stayer getting up to win by three-quarters of a length.

“I was actually quite happy with the tempo,” McNeil said.

“His first time at the trip, I was questioning whether he was going to relax enough…but he switched off lovely today off that tempo and with a bit of ducking and weaving, once we got clear, he stayed out really well to the line.”

After settling second throughout, the Trent Busuttin & Natalie Young-trained Inverloch ($8) proved extremely brave holding to finish runner-up, while Skelm ($26) caught the eye flashing home late for third to round out the Mornington Cup trifecta.

Stable representative Jack Turnbull was thrilled with Aktau’s effort in the Mornington Cup, confirming the Caulfield Cup target after the horse went out for a well-deserved break.

“To come form that far back, it was a good speed throughout and the turn of foot he showed was just brilliant,” Turnbull said.

“We bought him as a Cups’ prospect and now he’s got that ticket into the spring.

“He’s naturally going to get better with time…but to do this now in this initial preparation is just fantastic.

“He’s off to the paddock for a well-earned rest…he’s done a marvellous job and to win this race is just the icing on the cake.”

All-in Caulfield Cup 2020 betting markets at Ladbrokes.com.au currently have Aktau at $31 and are available here.