A thrilling dash to the finish in Saturday’s Group 3 NE Manion Cup (2400m) has seen the French-bred, British-trained raider Young Rascal firm into favouritism ahead of next month’s $2 million Sydney Cup at Royal Randwick. 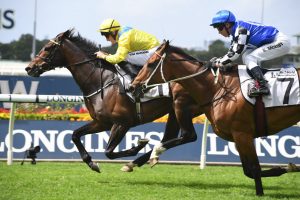 UK raider Young Rascal is off to the Sydney Cup having won the 2020 NE Manion Cup on Golden Slipper Day. Photo: Steve Hart.

William Haggas’ talented five-year-old had plenty of work to do against a proven field of stayers that was dominated by the short-priced favourite Mugatoo, but managed to come back strongly down the straight to outlast the favourite.

Mugatoo accounted for over 75% of Ladbrokes.com.au’s hold having won all three of his previous starts. Jockey Kerrin McEvoy got to the outside sitting fifth on the turn but failed to see off Tom Marquand and Young Rascal over the final furlong.

Marquand came back strongly to take up the lead at the 100m mark on the inside of Mugatoo to win by half a length – an impressive feat carrying 5kg more in the weights.

As a result, Young Rascal has now firmed from $8.00 into $3.60 in the all-in 2020 Sydney Cup betting markets at Ladbrokes.com.au, a race Harry Eustace feels more than confident in winning in three weeks’ time.

“If we could get a trip like that, from his draw Tom did incredibly well, so if we can get that again in the Sydney Cup it would be ideal,” Eustace told Sky Racing.

“He was very brave there because coming off the bend he looked beaten but he always has been tough at home too. He really dug deep for us. It is fantastic.”

Mugatoo also lost no admirers in his fourth run back finishing a very brave second, but that hasn’t stopped him from drifting in futures Sydney Cup odds from $3.50 out to $4.20.

Also not to be forgotten was the Hawkes-trained Supernova finishing third second-up.

The Hawkes were the last Australian trainers to win the Sydney Cup in 2012 with Niwot, with seven overseas imports winning since.

The updated Sydney Cup 2020 market courtesy of Ladbrokes.com.au can be viewed by clicking here.