2020 The Galaxy Winner I Am Excited Targets Robert Sangster Stakes

There was a massive upset in the final Group 1 on Golden Slipper Day with three double-figure roughies filling the 2020 The Galaxy trifecta led by the narrow David Pfieffer-trained winner I Am Excited. 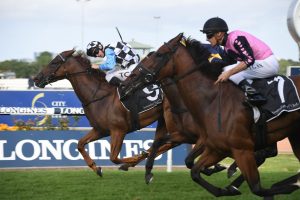 I Am Excited celebrated her first Group 1 win in the 2020 The Galaxy results on Golden Slipper Day. Photo: Steve Hart.

Five-year-old Snitzel mare I Am Excited went around at $26 in the Group 1 $700,000 The Galaxy (1100m) at Rosehill Gardens going up in grade off her lead-up second in the Group 3 Wenona Girl Handicap (1200m) earlier in the month at Randwick.

It had been a while between drinks too for the mare, sixth to Nature Strip in last year’s The Galaxy results, whose last victory was in Brisbane’s Group 2 Victory Stakes (1200m) nearly 12 months ago.

She finally broke through for an elite level win, Pfieffer’s first Group 1 success as a trainer, however thanks to a perfectly timed ride by jockey Tim Clark in The Galaxy.

“It’s my first Group 1 and hopefully it’s not my last. I’ve been training 12 years so it’s been a while coming. I’ve had runners in Group 1 races and run placings and so forth but getting that first win is very special and it’s good for a good group of owners who have supported me,” Pfieffer said.

Rival hoop Billy Egan was quick out aboard the Shaun Dwyer-trained Miss Leonidas who led the field around setting a cracking pace up front before they spread out approaching the turn.

It was a thrilling photo finish in the end with first two very wide apart on the line, I Am Excited just getting there by a short half-head over Miss Leonidas ($31) after Clark came off the rails on the straight.

Rounding out The Galaxy trifecta under a quarter-length beaten was the Michael Moroney-trained Tofane ($16).

“It was a great win, I didn’t know whether to go the early crow or not because it was quite tight at the finish. It’s a great result,” winning trainer Pfieffer told Sky Racing.

“I was confident that the horse was going probably the best of her career. I suppose coming up the inside it’s probably not the right part of the track but she toughed it right out.

“She’s a great mare, she has a real racehorse attitude and is a real pleasure having around the stables. I don’t want to say she trains herself because I don’t want her taken off me but I wish every horse had her mentality and attitude.”

The Galaxy result saw Clark equal the record of three wins by a hoop with Peter Clark, his previous winning rides in the short-distance feature being aboard Typhoon Zed (2008) and Atomic Force (2011).

“She began well, and being nice and fresh, David freshened her up, it probably allowed me to be that pair closer which ultimately won her the race,” Clark said.

“She travelled great throughout. We just hit a patch before the turn where she faltered slightly but she picked herself back up and she was very brave and gave me everything she had.

“I thought I did win but definitely wasn’t going to go off before I saw the number in the frame. A great result. A good job by David. He freshened her up and wrapped to get another Group 1.

“The Galaxy was my first G1 and this is my third now so it has been a good race to me. Very privileged to be able to take it out again.”

From there the mare is likely to have her sixth Group 1 start when heading to Adelaide on May 2 for the $600,000 Robert Sangster Stakes (1200m) at Morphettville.

“She’ll probably go to the Sapphire then the Sangster, whether we stick to the plan or not we’ll have to see,” Pfieffer said.

The latest all-in 2020 Robert Sangster Stakes odds at Ladbrokes.com.au list I Am Excited at $12 and are available here.