The $600,000 Rosehill Guineas (2000m) went to Castelvecchio on Saturday as Richard Litt’s talented three-year-old put paid to the favourites to claim his second Group 1 win. 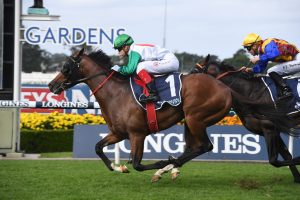 The colt by Dundeel was third-up after failing to run a place in the Hobartville Stakes and the Randwick Guineas, but had form around him over the trip after running second in the Champion Stakes and the Cox Plate during the Spring.

Castelvecchio, who won the Champagne Classic as a two-year-old, seemed to relish the step up in distance as jockey Craig Williams followed the race pattern to win a nail-biter over the brave Prince Fawaz.

Williams went forward early out of the gates to sit third behind Sherwood Forest, right before establishing a three-wide position coming down the straight. From there, Castelvecchio’s dazzling turn of foot did the rest as the pair kicked away over the final furlong.

“For me it’s massive, to produce another Group 1 winner is huge for my training career so it’s very special. There’s a little bit of pressure, I always say pressure is for tyres but today we felt it and we are just lucky we have a great horse,” Litt told Sky Racing.

The winning trainer is now faced with a difficult decision to head to the Australian Derby (2400m) on April 4 at Randwick or the $4 million Group 1 Queen Elizabeth Stakes (2000m) a week later.

Litt said after the race that Castelvecchio has serious Derby claims, but that he’ll leave the decision up to the connections.

“He holds a nomination in the Derby and the queen Elizabeth so we will let his connections make those decisions,” Litt went on to say.

“Today it looked like he was running away from them and I think he would eat up the Derby. There’s some wonderful prizemoney on offer so there’s plenty of thinking to do. Wherever he goes he’s going to be very hard to beat.”

There was also plenty to love about Prince Fawaz on Saturday after going around at $41.00 odds. The Fastnet Rock colt was third-up after finding no luck in the Randwick Guineas.

Saturday’s favourite Shadow Hero finished strongly for fourth but left it a little too late with Josh Parr in the saddle.