The crowd may have been absent at Rosehill Gardens for the 2020 Ranvet Stakes, but it was a grandstand finish nonetheless with the William Haggas-trained UK raider Addeybb holding off Chris Waller‘s class mare Verry Elleegant in a thrilling two-horse race to the line. 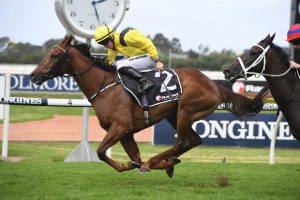 Both events resulted in spectacular finishes, Marquand proving a wonder down under continuing his brilliant rides in Australia.

“Huge credit has to go to Tom. He is very strong and never gives up. I wonder as well the way he gets them rolling, I think the other jockeys think he’s got less horse under him than he has. You wonder if they commit a bit earlier. He knows our horses are going to run all the way to the line. They were pretty fit when they came,” Haggas’ stable rep Harry Eustace, brother of David Eustace who co-trains with Ciaron Maher, said post-race.

“I’m delighted for Tom, it’s his first Group 1 and it is fantastic they we managed to get it for him. We’ll have a beer tonight I hope. He’s rated very highly at home, he’s ridden loads of winners and it is just happening for him now.”

In the Ranvet Stakes he pushed forward to take the lead on the easing Irish-bred Addeybb who sat ahead of the well-backed Verry Elleegant throughout.

The duo turned up the pace and the Ranvet Stakes became a genuine staying showdown.

Once on the straight, Verry Elleegant really poured the pressure on the outside of the international and the two moved well clear of the rest of the field to battle it out stride for stride.

Verry Elleegant briefly got her nose in front but Addeybb fought back, lifting on the inside to draw ahead for a very deserving one and a half length victory.

“It was another peach, he controlled it from the front and again he gets going and I think everyone thinks he is struggling but he is just stoking the fire. I did say to Tom because he does love soft ground and he might take a bit longer to let himself down on this track and I think that was the case because he came back at the end and was well on top,” Eustace said of the Ranvet Stakes winner.

Addeybb was first-up in the Ranvet Stakes, his latest start being a second to Magical in the Group 1 Champion Stakes (2012m) at Ascot in October last year.

Verry Elleegant meanwhile was three runs into her autumn prep, the four-year-old having to settle for another second placing having finished runner-up to Te Akau Shark in the Group 1 Chipping Norton Stakes (1600m) last start.

In a distant third to round out the Ranvet Stakes trifecta was last year’s champion Avilius.

Addeybb heads towards the Group 1 $4 million Queen Elizabeth Stakes (2000m) at Royal Randwick on April 11 and with improvement to come, looks a hard to beat early favourite for the weight-for-age feature.

“They came here knowing for the two runs. They certainly weren’t wound up for this to be their absolute World Cup. It all depends on how they pull up and hopefully there is a bit more in them. We have a nice gap of time now until then so we can do a bit of work with them,” Eustace said.

Updated all-in Queen Elizabeth Stakes odds at Ladbrokes.com.au have Addeybb firming in from $5 to $3.20, while Verry Elleegant is out to $17.

“Too good the winner. She is going enormous, she can’t go any better. She will get her day,” McDonald said of Verry Elleegant after her brave second.