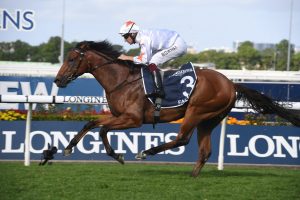 Flying Not A Single Doubt colt Farnan started favourite in the Slipper having won the Group 2 Silver Slipper Stakes – Todman Stakes double leading up to his Grand Final this autumn and didn’t disappoint.

Bowman continued his lovely association with the ultra-consistent youngster with Farnan taking up the early lead and holding off all his rivals to go all-the-way in the autumn classic.

“I’m lost for words to be honest. I’d just like to congratulate Gai and Adrian and their team for the preparation to develop this horse to behave and race the way he did this afternoon was second to none,” Bowman said after the race.

“I’ve been lucky enough to ride some really good horses over my career as everyone knows but I haven’t ridden a better two-year-old.

“Just his mannerisms and his professionalism that is one thing but his ability is another.”

She broke the record on Saturday preparing her seventh with Farnan her first in partnership with Adrian Bott.

Bott was reduced to tears after the race, an historical edition of the Golden Slipper taking place in front of a spectator-free grandstand as the COVID-19 pandemic shut out the racegoers.

The punters were sure to have been cheering from home all around the country however as Farnan bolted home from the wide barrier to defeat Ciaron Maher & David Eustace’s Magic Millions 2YO Classic winning filly Away Game ($10) by nearly two lengths.

In an eye-catching third a further length back to round out the Golden Slipper trifecta was the John Thompson-trained Mamaragan ($16), the Skyline Stakes winning colt having just his second career start.

Waterhouse may not have been trackside for her record-breaking Golden Slipper victory, but Bott was quick to pay tribute to Sydney’s leading lady of racing post-win.

“What a thrill, I’m very honoured and very humble to do it alongside a legend,” he told Sky Racing.

“For her to have six Golden Slippers, and now seven, and to do it with her, and with a colt with such quality, it’s really special for all involved. She makes it easy because she just expects you to win.

“She’s as confident as ever, maybe I worry a little bit more, but she’s always been confident and it is comforting to have that person alongside you who has been there and done it before so many times.

“Even down to the tactics, being dominant from that draw, was never a worry.”

Farnan took his record up to five wins from six starts with the only blotch being his luckless 10th to Away Game at the Gold Coast in January’s $2 million feature.

“He’s come back a different horse this campaign, he’s been quite special and he proved himself in the lead ups, he was very dominant, and he was dominant again today,” Bott said.

“He showed that tactical speed that he has always had and was able to control the race.

“There was more pressure on today, that was the question that had to be asked to him, and he responded well. He was able to quicken away off that and put them away nicely.

“I thank everyone at home for all their hard work to get the colt here today, and the support of Aquis and Phoenix Thoroughbreds without them we wouldn’t be here either.

“It’s a very surreal moment, the build-up, it’s been a long couple of weeks. I said earlier in the day the Todman felt like it was last season so for it all to fall into place, these Group 1s are hard to win and particularly the Slipper, it’s quite surreal it has all happened.”

“He ran super. He ran really really good. He peaked for a Blue Diamond. For a horse of his class to come back and still run fourth in a Golden Slipper is tremendous,” Walker said.

Tagaloa remains top of the all-in markets for the upcoming Group 1 Inglis Sires’ (1400m) at Randwick next month at $5.50 through Ladbrokes.com.au – odds for which are available here.