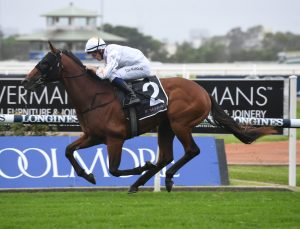 Prague is into the 2020 Golden Slipper field after winning the Pago Pago Stakes. Photo: Steve Hart.

It has been 15 years since Stratum won the Pago Pago Stakes – Golden Slipper double and markets have firmed on Prague to be the next after he drew away to defeat the promising Kumasi (2nd) and I Am Swerving (3rd) in the first leg.

Prague came into the Pago Pago Stakes having won two of his three previous starts including Randwick’s Group 3 Canonbury Stakes (1100m) before his somewhat disappointing sixth in the Group 2 Skyline Stakes (1200m) a fortnight back.

Reunited with his Canonbury Stakes winning hoop Tom Marquand in the Pago Pago, Prague ($8) was quick to atone and secure his start in the world’s richest race for two-year-olds.

“He’s a very relaxed horse and he is still learning his craft. You see last start off a slow pace he just over raced a little bit. He needs to be ridden that way. Tom suits him as a strong rider.  Hopefully he sticks with him for next week,” co-trainer Ciaron Maher said post-win.

It was Gai Waterhouse & Adrian Bott’s Vancouver colt Postcode best out of the barriers to take up the lead with the Gerald Ryan-trained last start Gosford winner Kumasi settled second.

Prague meanwhile was just off the pace tracking third then fourth on the outside.

Postcode led into the straight but was quickly left behind as Prague moved in to join Kumasi in the run for the line.

Prague got the upper hand at the 100m and drew away for the tidy win.

“Clearly he has got an exceptional amount of ability. He has still got untapped potential in the way that he went through the last couple of furlongs and he’s still not quite finished. He’s not 100% where his final destination is going to be,” winning hoop Marquand said.

“He’s a lovely big horse and he’s not done an awful lot of racing so there is no reason why he shouldn’t handle backing up.”

The Pago Pago Stakes winner was $31 before the race in futures Golden Slipper betting and is now into $15.

“We thought the run in if he had to back up that would work as his runs were well spaced early. Tighten him up and peak him for next week. He is a very relaxed colt and racing certainly doesn’t hurt him,” Maher said.

“He is still switching his ears around and he’s still progressing. I know there is a bit more in the tank and maybe the back-up will just switch him on a bit.”