James McDonald’s unbelievable day at Rosehill continued on Saturday as the superstar jockey picked up his fourth consecutive win in the Group 2 Ajax Stakes (1500m).

McDonald had won the previous three races on the card before re-saddling promising British import Imaging, who returned following a disappointing eighth in the Liverpool Cup at Randwick late last month.

The five-year-old had yet to win a race down under since making the trip last year, but still showed plenty of promise in his last start despite the result. McDonald and Imaging engaged in a memorable argy-bargy duel with Cascadian in the Liverpool City Cup, who was also in Saturday’s field running third.

“That can put a horse off, especially colts,” winning trainer Chris Waller said of the incident. 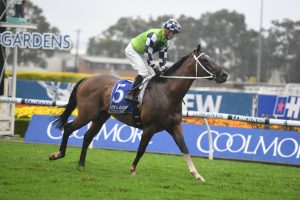 “James gave him a bit of room today. At least we’ve got that win on the board. I think Yulong Prince can step up to 2000m next start.”

Imaging will now head to the Group 1 Doncaster Mile (1600m) on April 4 in his second appearance at Group 1 level after failing to place in the Queen Elizabeth Stakes (2000m) last year.

Bookmakers at Ladbrokes.com.au have firmed Imaging from $26 into $17.00 ahead of the Doncaster Mile, while he remains a $101 chance in the Queen Elizabeth Stakes 2020.

“We are one step closer anyway. He’s in winning form and he’s come out of that scrimmage well. It was good to see him find all the way to the line.”

Yulong Prince, another of Waller’s runners, will also be hard to beat after running second. A step up to the 2000m is also on the cards with a nomination in next months Group 1 Queen Elizabeth Stakes (2000m) at Randwick.

Imaging, meanwhile, will hope to become the fifth horse since It’s Somewhat in 2017 to complete the Ajax Stakes – Doncaster Mile double.

Complete All-In markets on the Doncaster Mile 2020 can be viewed here courtesy of Ladbrokes.com.au.