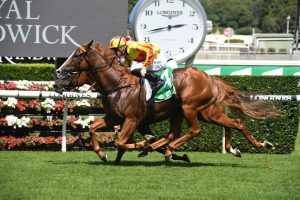 The latest Ajax Stakes odds at Ladbrokes.com.au feature five single-figure fancies in a battle for favouritism with the Mark Newnham-trained Quackerjack currently sitting as the $5 top elect.

The Not A Single Doubt four-year-old posted his eighth win at start number 19 last time out defeating a similar field of rivals home at Randwick on February 29 in the Group 3 Liverpool City Cup (1300m).

Quackerjack narrowly held on to salute fresh a fortnight ago carrying 56.5kg in his first run since taking out the Group 2 Villiers Stakes (1600m) over the mile back in mid-December.

On Saturday he goes up to 58.5kg in the Ajax Stakes weights chasing his third win on the trot.

The extra kilos and poor Rosehill form around the favourite however could open things up for an upset and hot on the heels of Quackerjack are a host of livewire chances.

Occupying the second line of Ajax Stakes betting at $5.50 is Cascadian for Godolphin, the James Cummings-trained New Approach gelding third-up on the weekend.

He finished second first-up in the Group 3 Southern Cross Stakes (1200m) before carrying 58kg to a brave fifth under three lengths beaten in the Liverpool City Cup.

Cascadian drops back a kilo for the rematch this weekend and is drawn to get a gun run from barrier seven with Glyn Schofield replacing Glen Boss in the saddle.

Rock will again be ridden by Tommy Berry second-up, the lightly-raced Pierro four-year-old looking to retain his undefeated second-up record.

Winner of the Group 3 Cameron Handicap (1500m) at Newcastle over this distance in the spring, the gelding caught the eye fresh in the Liverpool City Cup with 55.5kg and comes back to 55kg getting the run of the race from barrier three in the Ajax Stakes on Saturday.

Co-trainer John Hawkes has prepared three Ajax Stakes winners in the past 20 years, the latest in partnership with his sons Michael and Wayne in 2014 with Messene.

Waller won the Ajax Stakes two years ago with Comin’ Through who went on to run second in the Doncaster Mile next-up, and this weekend the trainer is still in with four runners led in betting by Imaging.

A well-credentialed European import, the Oasis Dream entire debuted down under when eighth in the Liverpool City Cup and should be finishing much closer second-up getting out to a more suitable distance.

Rounding out the single-figure hopes at $7.50 is Anthony Cummings’ consistent Lope De Vega four-year-old Vegadaze who looks great value after three solid runs this prep including the second in the Liverpool City Cup.