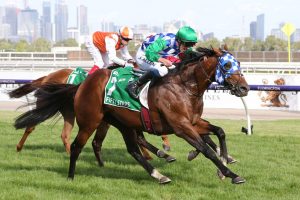 The team are now waiting to see how the gutsy Sea The Star entire comes through the Group 1 Australian Cup (2000m) triumph before deciding whether to race him on three straight Saturday’s for a shot at the $5 million The All-Star Mile (1600m) at Caulfield.

“It was a real thrill to win the 10th is just a fantastic effort from everyone for a lot of years,” Hall of Famer Hayes said.

“They can do it (race three times in three weeks). I saw the Irish mare (Magic Wand) do it last year (running in the Cox Plate, Melbourne Cup, Mackinnon Stakes)…so we’ll think about it for a couple of days and not make any rash decisions.”

Five-year-old Fifty Stars added to his value at stud going back-to-back at Flemington as the first winner of the Blamey Stakes – Australian Cup double since Better Loosen Up (1991).

“A huge thrill and it’s great to get a winner,” Allen said post-race.

“He’s got a good turn of foot.

“I was delighted to get on him today.”

It was a huge training performance to have Fifty Stars firing again on the short turnaround and a super ride from Allen travelling behind Railway Stakes winner Regal Power, who looked the winner at the 300m before being run down.

In a brilliant return to racing was the Danny O’Brien-trained Melbourne Cup champion Vow And Declare ($14) who rounded out the Australian Cup trifecta in third, two lengths ahead of the race’s two-time champion Harlem ($19) also representing Lindsay Park.

“We planned this race for a long time,” Hayes said of the Australian Cup for Fifty Stars.

“We set him for it and it paid off. I thought the tactics were spot on on the day too.

“All credit to Johnny Allen who sat on him and produced him late.

“He’s that (a high-quality horse) so he fitted the bill.”

Fifty Stars qualified for the 2020 The All-Star Mile field via the Blamey and is currently paying $13 to go around again and win the Special Conditions feature.

Regal Power, raced by prolific WA owner-breeder Bob Peters, is an emergency for The All-Star Mile and will back-up in the event joining stablemate Superstorm ($8) – a Wild Card contender – for trainers Grant & Alana Williams should he gain a start.

Click here for the latest The All-Star Mile 2020 odds courtesy of Ladbrokes.com.au.