The Bostonian could come up against another star Kiwi in Te Akau Shark next-up in the George Ryder Stakes following his big win over the beaten favourite Savatiano in the Canterbury Stakes 2020 results. 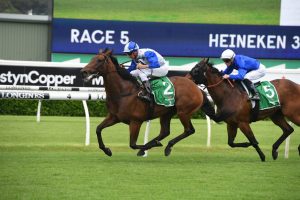 The first of two elite levels on the Randwick Guineas Day card in Sydney, the Group 1 $500,000 Canterbury Stakes (1300m) saw a return to winning form from the Tony Pike-trained New Zealander The Bostonian.

Last prep the Jimmy Choux gelding enjoyed a Group 1 double in Brisbane taking out the Doomben 10,000 and Kingsford-Smith Cup.

He had been winless since then with his last start being a disappointing eighth in the Group 1 VRC Classic (1200m) at Flemington last November when unsuited to the firm Melbourne tracks over the spring.

The Soft-rated going at Randwick for the Canterbury and the 1300m first-up suited the five-year-old to a tee and The Bostonian ($7.50) was able to defeat Godolphin’s well-backed mare Savatiano ($2.35) in a thrilling finish.

Ridden by Nash Rawiller for the first time, The Bostonian settled fourth the fence in the Canterbury Stakes as Savatiano led alongside Begood Toya Mother who did lots of work to join the mare in the lead.

Approaching the turn for home Savatiano had the advantage of the rails, but quick on the scene moving up on her heels was The Bostonian.

Rawiller got off the rails on the New Zealand galloper to give chase, The Bostonian looming on the outside before going for home over the final furlong, beating off Savatiano to celebrate his third Group 1.

The Chris Waller-trained roughie of the field, Mister Sea Wolf ($31), also caught the eye rounding out the Canterbury Stakes trifecta in third first-up after taking out the $1 million The Gong (1600m) at Kembla Grange last November.

It was also the third straight Group 1 victory at the Randwick track for the Kiwis following the Surround Stakes success of Probabeel and the fellow Jamie Richards-trained Te Akau Shark saluting in the Chipping Norton Stakes last weekend.

“It is great for the New Zealand industry as a whole. We have had a fair few quiet years. There are a few nice horses here, a few nice three-year-olds heading over after the Derby and Oaks so hoping we can have a really good carnival right the way through,” winning trainer Pike said after the race.

The Bostonian is likely to come up against Te Akau Shark next-up in the Group 1 $1 million George Ryder Stakes (1500m) at Rosehill on Golden Slipper Day, March 21, which Pike has pegged as a good autumn target.

“Just thought this was perfect. Thought 1200m was just on the sharper side. 1300m was probably ideal fresh up. Track conditions are just ideal for him. I thought he could win the Manikato but just didn’t let go on a really firm track that night. Hope for conditions like this throughout the carnival so he’ll be competitive in whatever he runs in,” he said.

“I’ll have a talk to the owners but probably the George Ryder but there is another horse from New Zealand we’ll run into (Te Akau Shark). I did beat him with an old horse Endless Drama but he looks exceptional. But that is the obvious target.”