Chris Waller’s star sprinter Nature Strip has eased out slightly from an earlier odds-on quote paying around $2 in Challenge Stakes 2020 betting in Sydney this weekend. 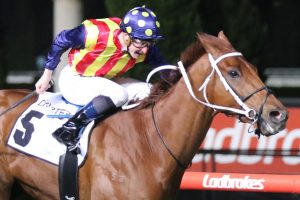 Nature Strip is tipped to break his Randwick hoodoo in the 2020 Challenge Stakes on Saturday. Photo: Ultimate Racing Photos.

A small but star-studded field of eight sprinters face off in this year’s Group 2 $500,000 Challenge Stakes (1000m) with Waller chasing his first victory in the weight-for-age clash with Nature Strip.

Nature Strip leads the Challenge Stakes odds at Ladbrokes.com.au after drawing the inside barrier for jockey James McDonald, the five-year-old son of Nicconi after his maiden win at the Randwick track.

Twice before the gelding has raced at Royal Randwick with both efforts producing fourth place finishes when beaten by Redzel in the Group 3 Concorde Stakes (1000m) and gun young stablemate Yes Yes Yes in the $14 million The Everest (1200m) last spring.

Nature Strip atoned with a huge three and a quarter-length win down the ‘Straight Six’ at Flemington in the Group 1 VRC Classic (1200m), returning at the same track first-up on February 15.

He went around odds-on in the Group 1 Black Caviar Lightning (1000m) but could only manage to run fourth behind the shock winner Gytrash.

Nature Strip gets the chance to atone second-up over the same distance (10:6-1-0) returning to Sydney for the first time since The Everest.

One thing firmly working in his favour is the rain-affected track as he boasts a 50% winning strike rate on Soft going and has won his only previous Heavy start to date.

Redzel has a long history in the Challenge Stakes having run second in both 2017 and 2019 and also winning the 2018 edition of the now half-a-million-dollar feature.

Jumping one on the outside of Nature Strip in gate two with his 2018 winning hoop Kerrin McEvoy in the saddle again, the veteran Snitzel seven-year-old is a gun at Randwick (18:-9-3-2) and is looking to improve on his eighth when failing to make it an historic hat-trick in The Everest last October.

“We just handpick the races with him now that he is getting older and we are looking after him,” co-trainer Peter Snowden told Racenet this week.

“We are very mindful where we run him and we will be selective where we go but it will be always the weight-for-age races.

“He is a great horse and has done a super job so that’s why I am very mindful of we are not going to hurt him or in races where he gives them weight in a handicap.

“We aren’t going to run him in races that we know it is going to be too hard for him but he looks good heading into Saturday.”

Redzel looks great value to defeat the favourite in the Challenge Stakes results in 2020 as the proven mudlark in the mix boasting a great record on Heavy tracks (8:3-2-1).

“We are really happy with him after that return and why wouldn’t you be?” Snowden added.

“He has come back really good and he is good to go for Saturday.”

The other previous Challenge Stakes winner chasing dual victories this year is the defending champion Ball Of Muscle who is a $34 outsider to go back-to-back in his fourth time in the event.

Denman five-year-old Deprive comes into the Challenge Stakes field undefeated at Randwick boasting six previous wins from as many starts at the track.

He is first-up and also a noted performer fresh (5:4-0-1) having last been seen running fourth to Pierata in Rosehill’s $1 million Redzel Stakes (1300m) last November and represents value here.

A win by Santa Ana Lane would also be far from a boilover with the Anthony Freedman-trained $7.5 million earner second in The Everest results last October before his fifth in the VRC Classic.