The $5 million The All-Star Mile (1600m) at Caulfield on March 14 is the next-up target for Saturday’s incredible Australian Guineas 2020 winner Alligator Blood following the Queenslander’s all-too-easy win at HQ on Saturday. 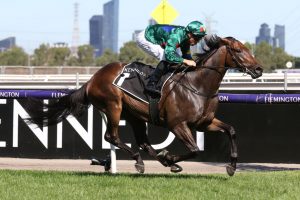 Alligator Blood was far too good for his rivals extending his winning streak in the 2020 Australian Guineas at Flemington. Photo: Ultimate Racing Photos.

The Group 1 $1.5 million Australian Guineas (1600m) was tipped as a two-horse battle between the Kiwi Catalyst and star Queenslander Alligator Blood after the duo fought it out in an epic race to the line a fortnight earlier in the CS Hayes Stakes.

It turned into a one-horse affair however with the David Vandyke-trained All Too Hard gelding Alligator Blood taking his record up to 10 wins from 11 starts including his last five on the trot this summer – autumn season.

“That was just amazing and wow, he just won with authority,” Vandyke said post-race.

“It was just an amazing performance at Group 1 level in a top-class field.

“I’m just blown away by what he did then.

“It’s just been lifechanging (moving to Queensland). I wouldn’t have found him (Alligator Blood) if I didn’t go.

“It just goes to show, don’t ever give up when you’re down and out because you never know where it’ll lead you.”

Jockey Ryan Maloney celebrated his maiden Group 1 winning ride aboard the champion in the making continuing his successful association with the horse who has more than made his move to Queensland worth its while.

“Oh mate, what a way to do it, this horse, David, the owners, back at home at Headquarters,” Maloney said.

“It was a one act affair in the end.”

Alligator Blood was the big Australian Guineas market mover backed into $2.70 at Ladbrokes.com.au come jump time in the mile classic, while the New Zealander Catalyst was on the drift.

Jockey Ethan Brown caused a bit of early pressure for Maloney revving up on 300/1 outsider Commodus, the bolter forced up on the outside to take the lead from Alligator Blood.

The race just wasn’t run to suit Catalyst who found himself stuck behind them, over-racing a little bit and never working his way into it.

Maloney meanwhile kept a level head and didn’t panic aboard Alligator Blood, letting Commodus find his position on the outside of him.

Despite being softened up a bit, Alligator Blood led into the straight and Maloney kicked for home 350m out.

Inside the final furlong Maloney really let down at the clocktower, releasing the breaks on the galloper who just kept responding sprinting away for a one and quarter-length win over the Perth visitor Superstorm ($10) with Soul Patch ($20) in a close third.

“I really had no choice but to use him in the early stages,” Maloney said.

“Had to use him a little bit but this horse has just thrived since his CS Hayes win.

“I can’t believe how easy he’s won in the end.

“It’s just a testament to him and to David.”

After clicking heels and nearly falling, Chenier did well to pick himself up and finish fourth in the Australian Guineas results.

She then backed-up to take out the inaugural edition of the Special Condition All-Star Mile when the event took place for the first time at Flemington.

Updated The All-Star Mile odds at Ladbrokes.com.au have Alligator Blood as the $3 favourite after firming in from $5, while Catalyst has eased out from $4.20 to $8.

“We can look at the form and think where he should finish in a field but his determination and will to win has gone to a new level.

“This bloke just makes me look good because he’s special. I won’t say he’s a champion, but he certainly is to me.”

Click here for the latest 2020 The All-Star Mile betting markets courtesy of Ladbrokes.com.au.