Saturday’s upset Group 2 Skyline Stakes winner Mamaragan has come from nowhere to earn a ballot free ride into next month’s iconic Golden Slipper field with odds on the colt to win the $3.5 million feature firming notably following his successful debut. 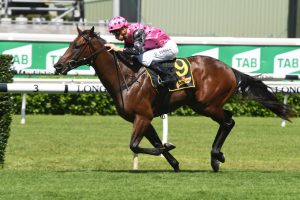 The winners of both the Sweet Embrace Stakes and Skyline Stakes are into the Group 1 $3.5 million Golden Slipper Stakes (1200m) at Rosehill on March 21 following the Randwick results on Chipping Norton Stakes Day.

Dance Hero (2004) was the last horse to complete the Skyline Stakes – Golden Slipper double, and this Sydney Autumn Racing Carnival it is the John Thompson-trained son of Wandjina Mamaragan looking to be the next.

2016 Golden Slipper winning hoop Blake Shinn (Capitalist) was back with a bang only flying in from Hong Kong yesterday ahead of his Skyline Stakes victory aboard $19 outsider Mamaragan in what was an emotional result for the jockey.

“It nearly brings me to tears. John has been a supporter from day one. Wilf Mula has been a great friend, great supporter. Big team effort, that is what it is all about. It is why we are in this game to have moments like these. Very touching,” he said.

“The horse has got lots of natural ability. He’s an early type, he’s proven that. He’s raw, you’re only a two-year-old once and he’s won the lead up to the Slipper in fine style.”

Mamaragan came off back-to-back winning Randwick trials from earlier in the month but had been left alone by the punters for his debut with undefeated Canonbury Stakes winner Prague ($2.60) the hot favourite.

Shinn steered Mamaragan perfectly from a wide barrier to get the money in a time a touch faster than the Chris Waller-trained Frankel filly Hungry Heart won the Sweet Embrace in one race earlier on the card.

It was Postcode leading the Skyline Stakes two-year-olds around, while Shinn had the eventual winner posted in the ideal position second in a tightly bunched field.

Approaching the turn for home only four length separated first to last with the Peter & Paul Snowden-trained Aim at the back heading into the straight needing luck.

Over the final furlong Mamaragan lay it down to the pacemaker Postcode, taking the lead at the 150m and flying to the line giving nothing else a chance.

On the line Mamaragan had one and a quarter-lengths to spare over Waller’s $1.7 million buy Osamu ($19) with Aim ($4.80) running an eye-catching third making up ground to round out the trifecta nearly a length further back.

“He’s very raw, very new but had potential. That’s the word, potential. The sky’s the limit, you saw today he was very raw in front he didn’t know what to do but he will improve a lot from the run,” Thompson said of Mamaragan post-win on Saturday.

“He was the only one I accepted with (for the Golden Slipper). He just looked a goer early. I’m not one to try and get Slipper runners, he’s just been a natural from day one. It’s great to have one in it.

“I’m sure he will do well, he was a good doing colt with a great attitude and it’s exciting.

“He was a little bit slow but he has good speed, he’s a high cruising speed horse. You see it in his trials, he does it so effortlessly. He has a good horse’s action, he’s learning but if he improves from this he will be hard to beat (in the Slipper).”

Gai Waterhouse’s Silver Slipper winner Farnan is top of the all-in Golden Slipper betting markets at Ladbrokes.com.au to hand his trainer with a record seventh win in the world’s richest race for two-year-olds.

The Golden Slipper odds on Mamaragan meanwhile are now into $31 from $101 following his Skyline Stakes success.