The 2020 Blamey Stakes is the key support act at Flemington on Australian Guineas Day this Saturday and betting on the Group 2 is led by the defending champion Fifty Stars. 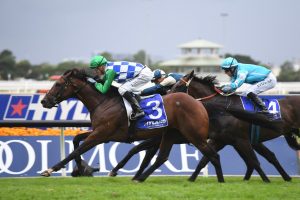 Durbridge (1994-95) was the last back-to-back winner of the mile feature, a feat the Lindsay Park-trained Fifty Stars is out to emulate this weekend in the Group 2 $200,000 Thoroughbred Club Blamey Stakes (1600m).

The five-year-old is at a current quote of $3.60 and firming to take out the title again after saluting second-up last season as a $9.50 shot in a 14-horse field.

Fifty Stars went on to win Rosehill’s Group 2 Ajax Stakes (1500m) following the Blamey in 2019 on a Heavy (9) track but hasn’t been first past the post since.

Despite a year between wins he shapes up as the one to beat returning to Flemington where he ran a nice second to Fierce Impact in last November’s Group 1 Cantala Stakes (1600m) and fifth when stepped up in distance for the Group 1 Mackinnon Stakes (2000m) on successive Saturdays.

He ran 11th first-up in last year’s Group 1 CF Orr leading-up to the Blamey Stakes and finished fourth at blowout odds ($41) when only 1.65 lengths off the winning three-year-old Alabama Express in the same event this season.

It is an open Blamey Stakes betting affair in 2020 with a further five runners under $10 to stop Fifty Stars going back-to-back including the firming $4.20 second elect Night’s Watch.

It has also been a while between drinks for the Redwood six-year-old who hasn’t won a race since the Group 3 Naturalism Stakes (2000m) back in September of 2018.

Like Fifty Stars, he too has Group 1 form around Fierce Impact when runner-up in last October’s Group 1 Toorak Handicap (1600m).

First-up Night’s Watch ran 11th in the CF Orr and he is out to emulate Fifty Stars by improving on that placing with a Blamey Stakes win second-up on Saturday coming back from 59kg to 55kg at set weights plus penalties.

Lightly-raced seven-year-old Admiral’s Joker has just his 17th career start, the Seymour Cup winner third-up after a fifth to Anaheed in the Group 2 Rubiton Stakes (1100m) and fifth again behind Galaxy Raider last start in a 1400m Flemington handicap on February 15.

A stablemate to the favourite, So Si Bon is also prepared by David & Ben Hayes and Tom Dabernig with the So You Think six-year-old looking to improve on a lead-up CF Orr Stakes eighth.

Four-year-old Sebring entire Ringerdingding looks to add to his strong 1600m record (4:2-0-0) and is also a CF Orr graduate (10th) who will appreciate the extra distance, while Guizot comes off a third to Miss Siska in the Group 3 TS Carylon Cup (1600m) at the start of the month.