Next month’s iconic Golden Slipper Stakes 2020 is now firmly on the cards for Farnan after his upset win in Saturday’s Group 2 $200,000 Silver Slipper Stakes (1200m) at Rosehill Gardens where the odds-on favourite Cellsabeel was never a threat. 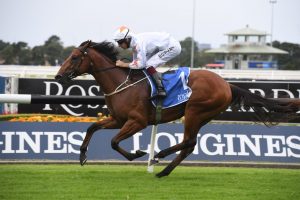 Farnan was too good for his rivals in the 2020 Silver Slipper results ahead of the $3.5 million Golden Slipper next month. Photo: Steve Hart.

She came off a barnstorming six length win fresh at the track a month ago before her campaign was disrupted with the rescheduling of the washed-out Inglis Millennium.

The brilliant young daughter of Hinchinbrook however failed to make up ground from the back eventually finishing well back in the Silver Shadow Stakes results behind the Gai Waterhouse & Adrian Bott-trained winner Farnan.

“Not sure, a real headscratcher. She never took me into the race at all today, I was gone at the 600 and never felt like I was ever going to be a threat in the race. Completely different to what I rode five weeks ago,” Cellsabeel’s jockey Tommy Berry said after the loss.

The Group 1 $3.5 million Longines Golden Slipper (1200m) is the richest race in the world for juveniles taking place back at Rosehill on March 21 and Sydney’s leading lady of racing, Gai Waterhouse, chases her incredible seventh win in the classic.

Cellsabeel was second last out of the gates in the Silver Slipper on Hobartville Stakes Day, while the eventual winner Farnan was best out with jockey Hugh Bowman in the saddle.

Bowman was having his first ride on the Tulloch Lodge-trained Not A Single Doubt colt who won his opening two career starts in the summer before a last start 10th to Away Game in the Magic Millions 2YO Classic at the Gold Coast on January 11.

Farnan had been kept fit with a recent Warwick Farm barrier trial win and took advantage of his barrier three draw in the Silver Slipper.

Every Rose showed great early muster to head off the field and take up the front run going quickly in the lead ahead of Farnan who settled well in second just ahead of the Chris Waller-trained Canonbury Stakes runner-up and Group 3 Breeders Plate winner Global Quest racing along in third.

Every Rose led into the turn, Cellsabeel still six off them at the top of the straight, before Farnan moved up to take the lead giving a kick at the 250m.

Farnan was off and gone over the final furlong absolutely bolting home in a very impressive effort finishing over three lengths ahead of Global Quest (2nd).

“Dominant performance that felt as good as it looked. He’ll make his presence felt in the Golden Slipper.”

Rounding out the trifecta in an eye-catching debut four and a half-lengths off the winner was the Team Hawkes-trained North Pacific.

Farnan will now look to complete the Silver Slipper – Golden Slipper double last achieved by the filly She Will Reign (2017).

Prior to his shock Silver Slipper Stakes success Farnan was paying $51 in pre-field Golden Slipper odds at Ladbrokes.com.au.

He has subsequently firmed into $8 occupying the second line of the markets, while Global Quest has firmed from $26 into $19.

Silver Slipper disappointment Cellsabeel was at $7 in futures Golden Slipper betting as the equal favourite with Hanseatic and is now out to $12.

Hanseatic is now the sole Slipper favourite and races later on Saturday as the punters’ pick in Melbourne’s Group 1 $1.5 million Blue Diamond Stakes (1200m) at Caulfield, the results of which are sure to further affect the Slipper markets.