The Group 1 $1 million Randwick Guineas (1600m) at Royal Randwick on March 7 is the likely next-up target for shock 2020 Hobartville Stakes winner Brandenburg who returned to form as a $41 outsider in the Sydney feature. 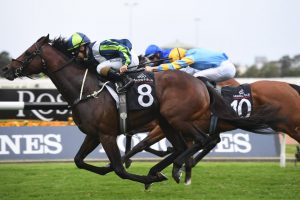 The Group 2 $400,000 Hobartville Stakes (1400m) at Rosehill is a key 2020 Randwick Guineas lead-up and was won in a massive boilover not long after $26 outsider Tagaloa took out the Blue Diamond Stakes in Melbourne in another notable upset.

That was the horse’s fifth top two finish on the trot and his second in Group company following his second to Colada in the Group 2 Stand Fox Stakes (1500m) at Randwick in October.

A good performer fresh, Brandenburg franked the form and ran far better than his price suggested in the Hobartville Stakes on the back of two good Sydney trials this summer.

Ridden by Rachel King, Brandenburg got up on the outside after settling to run second behind the hot Group 1 winning favourite Microphone.

With two runs already under his belt this prep including the last start Group 2 Autumn Stakes win at Caulfield, the Godolphin-raced Microphone was clear favourite in the Hobartville and absolutely flew out the gates to take a very easy lead.

Also up on the pace in third on the fence was the Chris Waller-trained Group 1 placed Snitzel colt Reloaded.

Jockey Hugh Bowman held Microphone together coming into the turn, the favourite showing the way onto the straight.

Brandenburg however was finishing of extremely well, moving up to take the lead 150m out form the line with Reloading charging up through the middle to really make a race of it.

In a tight finish, Brandenburg saluted by a long neck over Reloaded ($12), while Microphone ($2.25F) finished third as the beaten favourite with no excuses.

“That was good,” winning hoop King said after the race.

“I had a bit of confidence in him after riding him in a bit of trackwork but I guess because he hadn’t performed at the top level yet, he was a bit of a forgotten horse.

“He’s only going to get better going up in trip.”

The Autumn Sun was the seventh Randwick Guineas winner in as many years to come out of the Hobartville Stakes and the fourth to do the double along with: Dissident (2014), Hallowed Crown (2015) and Kementari (2018).

Updated Randwick Guineas 2020 odds at Ladbrokes.com.au on this year’s Hobartville Stakes winner Brandenburg have firmed $17 into $9.

An impressive ride from James McDonald in the Godolphin blue has seen Cascadian over the line in the Group 3 Doncaster Prelude (1500m) at Rosehill. Th…

The Bjorn Baker-trained Positive Peace has claimed his fifth in a row at Rosehill by taking out the Group 2 Emancipation Stakes in impressive fashion.…

Verry Elleegant answered her critics at Rosehill on Saturday by backing up to win her third Group 1 in an absolute canter. After running second in the…