Everything went right for Linda Meech at Caulfield on Saturday aboard Group 1 Oakleigh Plate winner Pippie.

The pair led from barrier to box to win by half a length, handing Meech her second Group 1 win as well as a spot in the history books as the first-ever female jockey to win the time-honoured race. 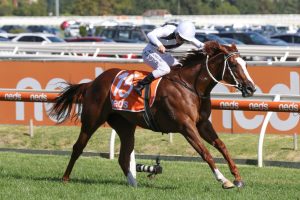 Pippie was a $12.00 chance to win the Oakleigh Plate on Saturday. Photo Credit: Ultimate Racing Photos.

With the majority of favourites struggling to make up ground on the choppy track, Meech wasted no time setting the pace up front as the pair picked up speed on the outside of Ball of Muscle.

From there, Pippie took off like a jet as Meech utilized her speed and turn of foot to put the rest of the field to bed.

“I said last time in she went out a little girl and she’s come back a grown-up woman. Today she was just pure speed and too good, fantastic result.”

Meech only brought out the whip at the 50m mark with second place-getter Zoutori looming, but the pair still had plenty left in the tank.

Pippie, who was first-up after running second in the Group 3 Furphy Sprint at Flemington back in November, currently holds no other nominations going forward. With five wins from nine race starts though, the lightly raced four-year-old has plenty of options ahead.

Alongside Meech’s milestone, Pippie also became the seventh horse to win the Oakleigh Plate from a double-digit barrier in the last 12 years.