Shane Nichols’ tough gelding Streets Of Avalon has raced his way into the $5 million The All-Star Mile field next month with a gutsy all-the-way upset in the Futurity Stakes 2020 results at Caulfield. 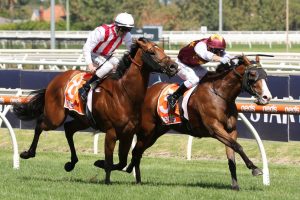 Boosting his career earnings up over $1 million, Streets Of Avalon will get the chance to more than double that on March 14 back at the track in the Special Condition 2020 The All-Star Mile (1600m).

The Futurity Stakes winner became the 11th horse to secure a spot in the event having relished the Good-rated course in the weight-for-age showdown for his eighth career win at start number 43.

The way the track was playing however suited Streets Of Avalon to a tee and with no pace in the race jockey Ben Melham was happy to go straight to the front on the pacemaker.

Super Seth stayed close on the pace in second throughout, while Melody Belle got a nice trail settled fourth in her first-up run of the autumn.

With 300m to go Super Seth moved up on the outside of Streets Of Avalon, jockey Mark Zahra trying to pick up the leader aboard the last start Manfred Stakes winner.

Despite carrying less weight, Super Seth couldn’t run down a tenacious Streets Of Avalon who kept digging and really kept his ears back going strong to the line in a tough and honest performance.

“With a lack of speed in the race, the track racing the way it was gave me great confidence,” Melham said post-win.

“He’s been very honest this horse. It looked the right set-up for him today.

“A well-deserved Group 1 win for the horse, he’s very honest.

“Shane Nichols is a good bloke. It was good to finally repay him with a Group 1.

It was an exciting finish with Melham and Zahra battling it out, while Melody Belle was far from disgraced rounding out the Futurity Stakes trifecta in third.

Making the win even more impressive was the fact Streets Of Avalon was on the quick back-up having been collared late when second at Flemington just last Saturday in a 1400m handicap.

Nichols now focuses his attention on the All-Star Mile race, Streets Of Avalon added into the markets at Ladbrokes.com.au as a $21 chance.

“I’m just trying to absorb all that,” he said.

“We knew the noms weren’t strong and big in numbers. There didn’t seem any natural leader in the race.

“He was in good nick, he does backup well as you’ve just seen.

“I thought Super Seth with less weight than us stalking him was going to be a problem, but god he’s tough.

“I just assumed Super Seth was going to get us.

“But I knew he (Streets Of Avalon) wouldn’t wilt.

“Bring on The All-Star Mile.

“We might change the gear. Might pull the blinkers off or tamper with the gear a bit.

“Might as well have a crack for the big cash as he’s rating’s stuffed now. He’s smashed through the million-dollar barrier.”

Super Seth has firmed in from $8 to $6 despite his second as the beaten favourite in the Futurity, while Melody Belle has eased out slightly from $8 to $7.50.

Stable representative Paul Richards was pleased with her return knowing she was vulnerable fresh and said she would only improve off that run.

“We’ll just tick her over. She might even come back here on the Tuesday and have a bit of a hit out.

“But today will really tighten her up.”

Disappointment of the Futurity meanwhile was Epsom Handicap winner Kolding who looked very uncomfortable in his first run the Melbourne way.

“He struggled on every corner,” jockey Glen Boss said after the race.

“He was dying to get back on his Sydney leg around the corner.

“He didn’t run well. He was pretty plain.

“He’s got three weeks to get his stuff together.”

Kolding is out from $7 to $9 in All-Star Mile odds with less than month before he has another go at the Caulfield track.

Click here for the latest 2020 The All-Star Mile betting markets courtesy of Ladbrokes.com.au.