Ladbrokes Caulfield Guineas winner Super Seth has firmed into clear favouritism to beat the gun Kiwi mare Melody Belle in what is shaping up as one of the most intriguing editions of the Futurity Stakes in recent years. 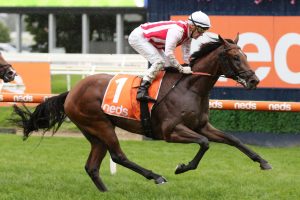 The Dundeel colt won the Guineas narrowly defeating Alligator Blood, the runner-up going on to win all four of his subsequent starts including the Gold Coast’s Magic Millions 3YO Guineas.

Alligator Blood raced last Saturday at Flemington in the Group 3 CS Hayes Stakes (1400m) and could not have been more impressive fighting off the champion New Zealander Catalyst in the race of the season so far.

Now it is Super Seth’s turn to put a topline horse from across the Tasman in their place when he takes on 10-time Group 1 Melody Belle in the Futurity.

First-up Super Seth and Zahra combined for a tidy one and a quarter-length win in the Group 3 Manfred Stakes (1200m).

That was his fourth win from five starts at the Caulfield track where he races again this weekend sure to appreciate the extra distance and the drop back from 59.5kg to just 55.5kg under the weight-for-age conditions.

After opening at Futurity Stakes odds of $2.90 through Ladbrokes.com.au Super Seth has been well backed into $2.70 as he looks to become the ninth favourite in 11 years to salute.

The danger is the returning Jamie Richards-trained Commands mare Melody Belle looking to add to her solid first-up record (6:3-0-2).

After nine Group 1 wins at home in New Zealand the five-year-old finally broke through at the highest level down under last spring winning the Group 1 Empire Rose Stakes (1600m) at Flemington on Derby Day.

She failed to make it 11 Group 1 victories when backing-up in the Group 1 Mackinnon Stakes (2000m) but lost few admirers with her brave second to Magic Wand last time out.

Saturday has her racing at Caulfield for the first time, but she’s a gun fresh and has a stellar record over 1400m with five wins from six starts at the distance.

The other major player in what is looking like a three-horse race on paper is the Chris Waller-trained Kolding at $3.30 in gate five second-up.

That followed on from his Group 1 Epsom Handicap (1600m) success with the light weight and saw his prize money earned exceed $5 million.

The challenge for Kolding will be racing the Melbourne way with the horse having raced exclusively in Sydney.

The $5 million The All-Star Mile (1600m) at Caulfield on March 14 is next on the agenda for Kolding and a good Futurity run will see him firm in betting on the lucrative Special Condition feature next month.