A return to the Flemington straight for next month’s Group 1 $1.25 million Newmarket Handicap (1200m) could be on the cards for progressive sprinter Gytrash after their boilover win in Saturday’s 2020 Black Caviar Lightning. 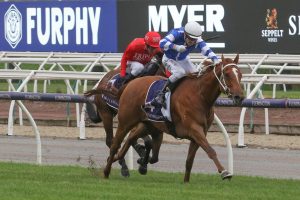 It was an upset in the end however with the Gordon Richards-trained Gytrash ($26) too good for the proven Group 1 winners in the race including the second placed Redzel ($7.50) and returning filly Loving Gaby ($5) in third.

Nature Strip ($1.45) meanwhile faded to finish fourth having used up too much energy in the speed battle.

The Black Caviar Lightning was like watching two separate races as soon after the jump the field split.

Jockey Kerrin McEvoy opted to take two-time The Everest champion Redzel to the far side where the $16 plus million earner led from Gytrash and I Am Excited.

Up the outside Nature Strip took the lead of the other pack where the Ciaron Maher & David Eustace-trained returning Manikato Stakes winner Loving Gaby was also camped.

It was hard for race fans to know where to look, but at the 250m the eyes went to the far side where Gytrash took the lead from Redzel.

In a massive upset, the Lope De Vega four-year-old was able to hold off the star-studded field to win the Black Caviar Lightning by a length with Mark Zarha in the saddle.

“I didn’t know, I thought the inside was better,” Zahra said post-win.

“I was happy. I followed him (Redzel). I travelled really sweetly.

“I looked across and saw Nature Strip was under a bit of pressure and I was going well.

“He (Gytrash) was too good in the end.

Gytrash had knee problems last year and had just the one run in the spring when second in Caulfield’s Group 3 The Heath 1100.

In a strong training performance by the Morphettville-based Richards, the horse had his training switched up to accommodate and returned with a bang to take his Flemington track record up to three wins from as many starts.

“I don’t think he’s 100% today…he’s still got a bit of improvement this prep which’ll be good.

“He come home strong and fought them off well I thought.”

Gytrash could now attempt the Black Caviar Lightning – Newmarket Handicap double last achieved by Redkirk Warrior (2018) with the ‘Super Saturday’ feature calling for him on March 7.

All-in 2020 Newmarket Handicap odds at Ladbrokes.com.au have firmed on Gytrash from $14 to $6.