The Godolphin trained Hanseatic will go into next fortnights Group 1 Blue Diamond Stakes unbeaten after winning the Colts and Gelding’s Prelude at Caulfield on Saturday.

Hanseatic, trained by Anthony Freedman, is now 3/3 in his lightly raced career after beating home a classy field of two-year-old’s in the leadup to one of the most exciting juvenile races on the calendar.

The colt by Street Boss went around as the favourite on Saturday and certainly lived up to the hype and the $2.30 price tag.

Jockey Luke Currie played a big part staying patient in the saddle before storming down the straight four-wide to nab the leading Rulership at the line.

Hanseatic’s turn of foot was never in question, but his behavioural issues were. Sam Freedman said after the race that the journey up until this point wasn’t easy, but he’s certainly encouraged by what he’s seen. 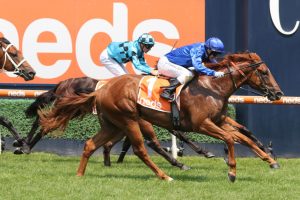 “Dad wanted to run him again, get him used to these surroundings,” Freedman said.

“He’s got a little bit of something different going on upstairs but we wouldn’t change anything.”

Currie chose to sit behind the speed in the early goings before exploding from the back to win by a head. The pair wore down Rulership over the final 100m, although Currie said after the race it was far from an ideal run.

“It was a bit messy; he jumped quite well and held a spot. I really wasn’t interested in giving him a dig and I’m glad I didn’t, because when they did steady, he got up and got going a bit, and I think most of the field did.

“He was lucky to sort of maneuver out in the corner and he had to give up ground doing it. I thought he levelled a bit late, but his run at the 1100m will do him a world of good for the Diamond” Currie said.

Hanseatic has since firmed from $3.60 into $2.60 favouritism in All-In Blue Diamond markets at Ladbrokes.com.au.

Rulership – who has firmed into $5.50 in updated 2020 Blue Diamond Stakes odds – was also handy on Saturday digging in for second place.

Complete 2020 Blue Diamond Prelude C&G results can be viewed below.