The Godolphin stable have a host of potential Group 1 autumn targets on the card for their back-in-form champ Microphone who was impressive late to take out the 2020 Autumn Stakes on CF Orr Stakes Day. 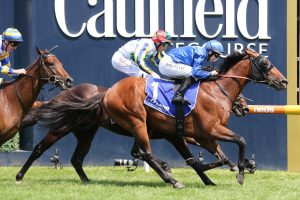 As a two-year-old the well-bred Exceed And Excel colt ran top two in his six opening career runs including backing up from his brave Group 1 $3.5 million Golden Slipper Stakes second to Kiamichi in the wet to win Randwick’s Group 1 ATC Sires Produce Stakes (1400m).

The now three-year-old relished getting back over that 1400m distance for the first time in the Group 2 $200,000 Autumn Stakes at Caulfield on Saturday after two losses over the shorter 1200m.

Microphone was quick to atone for that unplaced run second-up back against his own kind with the class rising to the top in the Autumn Stakes.

The bay carried the penalty as a Group 1 winner with 59.5kg at set weights plus penalties but was too good in the end, Damian Lane guiding Microphone ($2.60) to a narrow win for the punters.

The Danny O’Brien-trained filly Lady Lupino led the Autumn Stakes field around zipping to the early lead ahead of stablemate Banquo in second.

Lady Lupino led into the turn with the field chasing as Microphone left the fence at the 300m.

At the final furlong Banquo ran up on the outside past the filly looking to fly home.

Microphone ($2.60) began to lift and hit his straps however and ran down the tiering Banquo ($6.50) to score a neck win, while market mover Adelaide Ace ($4.20) held for third in the Autumn Stakes trifecta.

It was a workman-like performance from the Autumn Stakes winner who will only improve off the run having taken a little bit of time after straightening to pick up his rivals carrying that weight.

“He really attacked the line late.

“The step back up to 1400 (m) really suited him. He was able to travel better and able to finish the race off.”

The Royal Blue army were relieved with the Autumn Stakes result, their star back to his best ahead of big autumn full of Group 1 targets.

“Good to see this colt return in this sort of great condition and that sort of desire to get up and win a good drive to the line,” trainer James Cummings said.

“For a two-year-old colt to come back and be beaten in the spring and beaten last time out, he was always just looking for further.

“Damian really had to lift him late…he’s a horse that seems to love that winning post.

“He has a great winning record and he’s improved that today.”

Cummings said the stable were keeping the options open with Microphone a chance to back-up at Caulfield on Blue Diamond Stakes Day in a fortnight for a run in the Group 1 $500,000 Futurity Stakes (1400m).

Otherwise the galloper also holds a nomination for the Group 1 $1 million Australian Guineas (1600m) at Flemington on February 29.

There is also a chance Microphone could return to Sydney for the Group 2 $400,000 Hobartville Stakes (1400m) at Rosehill Gardens instead of the Futurity with the Group 1 $1 million Randwick Guineas (1600m) on March 7 also on the cards.

“Another Group 1 on his resume would look fantastic,” Cummings said.

“There’s options with him.

“We’ll just take our time and reflect on his performance and enjoy it for now.”